In honor of Michael Young announcing his retirement, I am bumping the randomizer’s selected post.

First impression of what’s going on: Michael Young is well in front of the base so he appears to be charging hard on a bunt or slow roller.  Good action shot, good crop. 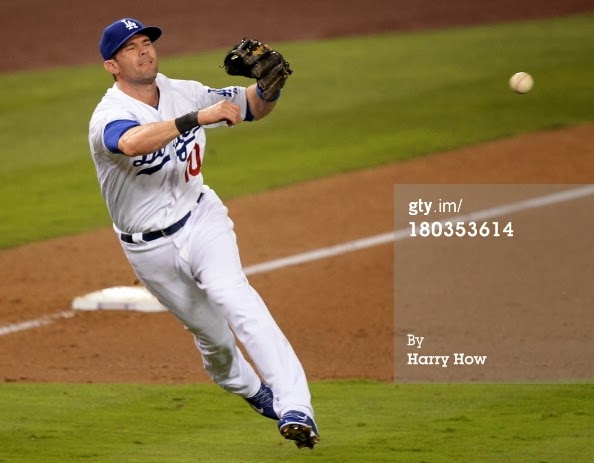 LOS ANGELES, CA - SEPTEMBER 11: Michael Young #10 of the Los Angeles Dodgers makes a throw to first base for Aaron Hill #2 of the Arizona Diamondbacks at Dodger Stadium on September 11, 2013 in Los Angeles, California. Hill was safe. (Photo by Harry How/Getty Images)

The Reality of the Photo: The uncropped version seems to lend creedance to my theory. The caption gives me some information to work with, but doesn’t tell the whole story. So let’s check out the BOXSCORE.

There’s no mention of the inning, but it does say Young is making a play against Arizona’s Aaron Hill. So let’s check the inning recaps and see if we can’t find a Hill plate appearance that makes sense.

First at bat in the top of the first, ground out to second base. Nope.

His second at bat, leading off the fourth inning was a single to left field.  The caption did mention Hill was safe, and it is the correct side of the field, but I don’t think this is the play. Let’s keep looking.

Third at bat came in the top of the 6th, again leading off. A ha! This time it’s a single to 3B and regarded as being hit to “weak” third base. Fits perfectly! Just to be sure, let’s see his last at bat of the game.

Hmmm, leading off again, this time in the 8th. Somebody needs a better setup guy in front of him! But this one was a fly ball to left-center.

Yesterday, I gave a stat line for the David Murphy because his card showed him in an offensive situation. And Chris Perez’s card showed him pitching so I included those stats. Baseball Reference doesn’t give fielding statistics in the daily boxscores, just on the individual player’s page. SO after tracking down that information, here’s his line for that game.

Two assists in two chances.  Young fielded another weak ground ball from Paul Goldschmidt in the third and one off that bat of Martin Prado to get a force out at second to end the 9th. I never really thought about how a player could field a ball and make the throw to first, without getting an error and there is no accounting for it in the stats. Apparently Chances consist of Assists + Putouts + Errors. Baseball cards be teaching me stuff! 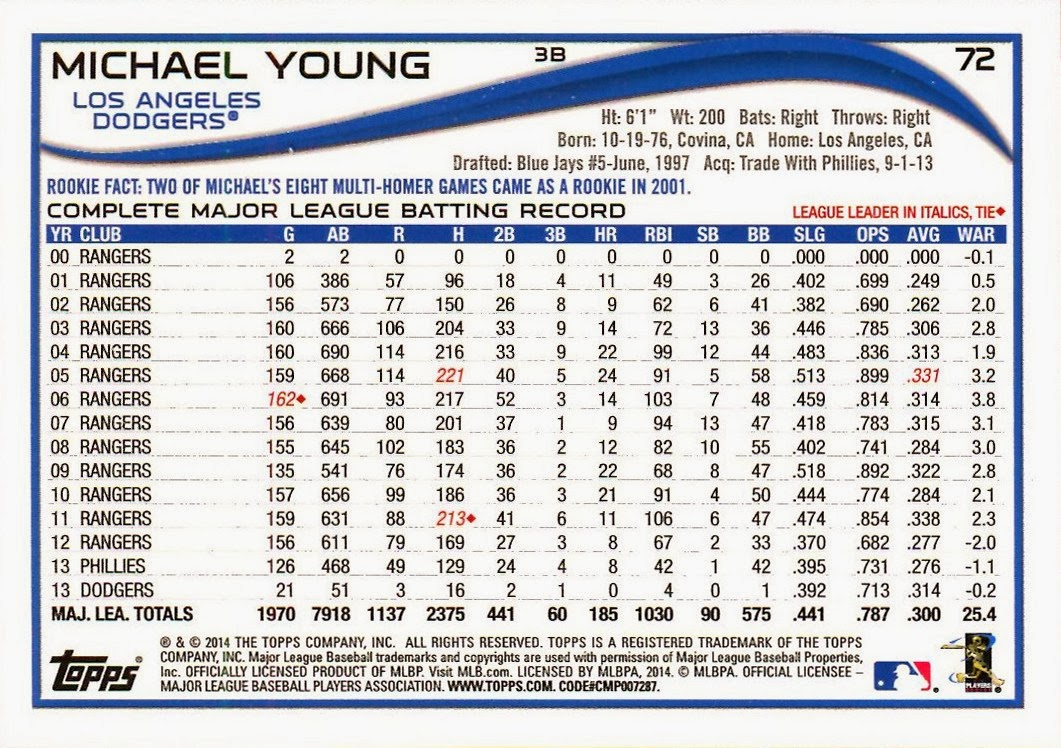 Rookie Fact: Two of Michael’s eight multi-homer games came as a Rookie in 2001.

When Young made his debut in the early 2000’s, I was playing the dating/marrying/having kids game so I wasn't paying as much attention to baseball as I had previously and do now. I have no idea if he was a highly touted prospect. I barely follow the American League as it is now, so I still don't really know much about him.

Despite what the PED era may lead you to believe, hitting a home run isn’t easy. Young is listed as 6’1” and 200 pounds on the back of his card, much bigger than me, but not exactly a hulking specimen when you think of home run hitters in the league. Even if he was, I don’t care who you are, hitting two in the same game is pretty impressive. And to do it as a rookie? Twice? Color me impressed.

Also of note is the extra red font in the statistics area on the back of the card. You know what that means. We've got a League Leader up in here! In 2005, while with the Rangers, Young led the American League with a .331 Batting Average while collecting a Major League leading 221 hits (a career high and 15 more than the runner up, Ichiro). The following year he tied the league lead for Games Played by participating in all 162 of the Rangers' games. It appears Young was consistently healthy throughout his career, as after his rookie season, he never dipped below 135 Games Played. He would tie for the league lead in Hits in 2011, but what the card doesn't show you is that Young would finish in the top four in hits four other times during his career.

My Grade: I want to like this card. You’ve got a veteran heading towards the end of his career, playing for his third team within 12 months. As I mentioned, he looks like he’s charging hard to make the play.  I’m trying not to take into consideration that the batter ended up being safe. Young is older than me and I don’t know that I could put in that much effort, haha.

Night Owl might not think he needs a Michael-Young-as-a-Dodger card for his collection (yeah, I saw that tweet), but I do think it was pretty cool that Topps got the card into Series 1 without utilizing Photoshop to change a Rangers or Phillies uniform. The photo is only about four and a half months old so that’s a pretty quick turnaround. I think in season’s past, Young would have been shown as a Phillie or maybe held until Series 2 or Update.

I think I’ll give this card another B-. Good action, good cropping. But there isn't much unique about it and unfortunately, the card itself doesn't fit into too many of the niche collections, which hold a good amount of weight on my grading scale.

It does have a few things going for it that may change my grade in the future. Since Young just announced his retirement, this might end up being his “Sunset” card. With a September 11th photo date, it currently holds the leads for latest picture to be included in Series 1. Granted, I'm three cards in, but we'll see how long it can hold the title. And with only 21 games as a Dodger, in a few years this card'll end up on somebody’s blog as an “Unfamiliar Uniform” post. So B-, and maybe with a little extra credit, it can move up.
Posted by Once a Cub at 9:00 AM