Shortly after the soft open of the blog, I announced a contest to try to drum up some followers before the official launch. First off, thanks so much to everybody who helped out by following me both here and on Twitter and to those who did a little free advertising for me on their own blogs and Twitter accounts.
First off, I offered up all of my inserts from my pack-itch-scratching blaster that I bought to go along with my complete set if I had 10 followers by the time I posted my first card. This amounted to about 30 cards, all inserts and parallels.

Well thanks to this wonderful community, I had 17 blog followers by the time the Daniel Murphy card posted on Friday morning! That may not sound like a lot, but I think it is pretty fantastic considering I hadn't even posted an example of what the next 1000 posts would be like. So thanks, too, for taking my word for it.

On the other hand, and maybe I'm reading too much into this, I haven't added any followers since the "real" posts started. But I'm ok with that. All of the posts so far have gotten comments so they are being read. And that's good enough for me. I'll paraphrase Field of Dreams here and assume if I continue to build it, they'll continue to come.

The second part of my challenge was to get to 20 followers by the same deadline. With that I was giving away my sight unseen, unopened pack that contained the commemorative manu patch from my blaster. As I mentioned above, I had 17 by the deadline (and still do) so unfortunately, I will not be including that as a prize. However, I'll be holding onto that as a prize for a later contest and instead will add a few extras to the package from the winner's favorite team.

As a recap here were the steps to join the contest:

Step 1. Follow this blog. Pretty simple stuff right there. If I'm not following you, I will. I'm always looking for some good reads.

Step 2. Promote my "Welcome" post on your own blog, if you've got one. Let me know when/where you've done that. Multiple promotions allowed, one per day limit.

Step 4. Retweeting any of my posts will get you an additional entry.


By my calculations, I had 32 entires into the contest. I typed out the list of entries over at random.org and ran the process three times (as I normally do). The first two times spreads out multiple entries by the same person. Kind of like cutting the deck before dealing. The third time provides the winner: 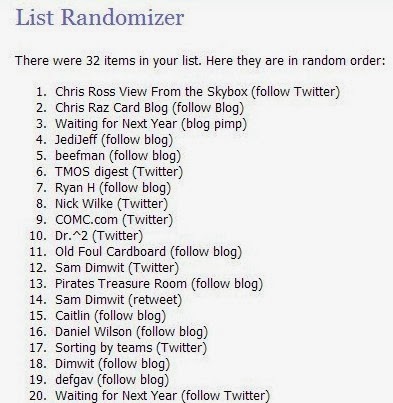 Congratulations to Chris from over at View From the Skybox. He followed the blog and also chose to follow me on Twitter, which gave him an extra entry to secure the victory. Shoot me your address and I'll get these to you ASAP.

Again, thanks to the rest of you that have done your share to spread the word. This was only the first of what I hope is several contests over the course of the year. If I haven't traded with you before, let's set something up! Check out my other blog, Once a Cub..., to get a sense of what I collect.

New card shown off Monday morning at 9 AM EST.
Posted by Once a Cub at 3:00 PM