In honor of the Super Bowl yesterday I thought I’d show some baseball representatives from the areas involved. First up from the Seattle Mariners, I have Kyle Seager.

First impression of what’s going on: Good action shot, though not great. I’d call it a play at the plate even though it doesn’t appear to be close with the catcher jumping to make the play. I’m going to go out on a shaky, thin limb and say Seager was safe. A couple of cameos I’ll have to try to figure out. 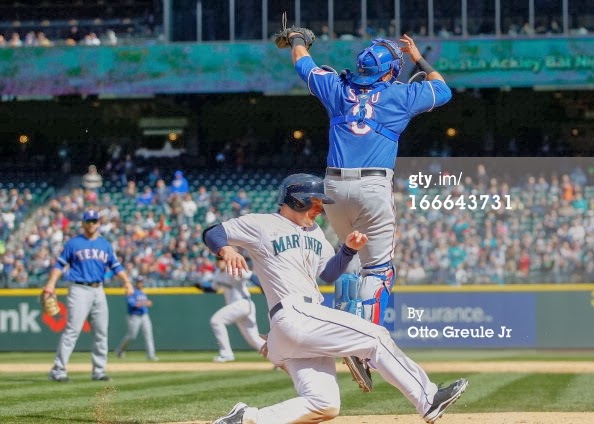 SEATTLE, WA - APRIL 14: Kyle Seager #15 of the Seattle Mariners scores on a single by Jesus Montero as catcher Geovany Soto #8 of the Texas Rangers takes the throw in the sixth inning at Safeco Field on April 14, 2013 in Seattle, Washington. The Mariners defeated the Rangers 4-3. (Photo by Otto Greule Jr/Getty Images)

The Reality of the Photo:  Another pretty self-explanatory photo. Surprise isn't the right word for it, but I found it interesting that Geovany Soto was the catcher. Former Cubs isn't a real niche collection of mine but I do point them out when I see them during Repack Breaks on my other blog, Once aCub… and will be tracking appearances even if its just his butt.

The caption gives a little more detail, like who hit the ball, but let’s go to the BOXSCORE to see if we can find out some more information.

Looks like the Mariners took the lead for good in the sixth inning when this picture was supposedly taken. Was this a game-winning run? Let’s go a little deeper and look at the inning summary.

Ok, so not the game winner, but Seager started the rally with a one-out double. He then scored on the Jesus Montero single to right field that resulted in the photo above. In the background, Montero is advancing to second on the throw home. Baseball-Reference also has a chart that shows the top plays of the game. Montero's RBI single tops the list for this game.

In my baseball experience, a ball hit to right field has the second baseman as the cutoff man. With the positioning of the photo, the blurry Ranger could very well be keystoner, Leury Garcia. Any Rangers fans out there that can help me ID the Rangers fielder and the other one in the photo that got cropped out of the photo on the left? 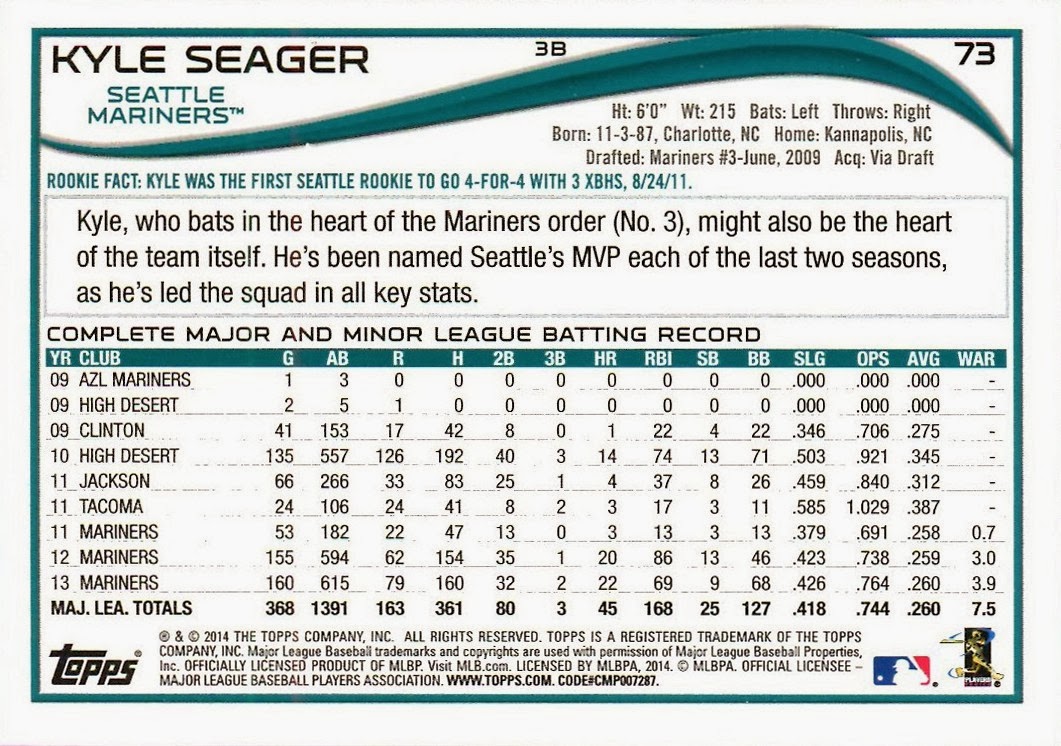 There may have been a rookie to go 4-for-4 but without the extra base hits or one that had three extra base hits but not a perfect 4-for-4. But even with the qualifiers, this is still a pretty impressive feat. In case you were curious, I’ve tracked down the BOXSCORE for that game too. Seager’s three extra base hits were all doubles and he managed to score three runs while driving one in during a 9-2 drubbing of the Cleveland Indians.

The blurb mentions Seager has been the team MVP for the past two seasons, but knowing the Mariners are just as happy the Astros have joined the AL West as the Cubs are disappointed they left the NL Central, that's not saying much. They've got some good young guys, tough.

My Grade: Although this card fits into four niche collections and is another I wanted to like, I think Topps could have done better. In my opinion, Seager’s head is too close to the top border. I have no formal art/photography/graphic design training but I vaguely remember a concept from art class when I was in school regarding the rule of thirds. It had to do with framing important elements of the art in certain areas of the overall composition. This card would have benefitted greatly from lowering the photo from where the top of his helmet is down to where his nose is, putting his face in a more prominent spot on the card. Even if that sacrificed a little more of his legs (an acceptable crop), you can still tell he was sliding home with the catcher in the picture.

My love of horizontal cards can’t overcome the fact that while Seager has all of his important appendages, the card is poorly cropped and just slightly above average at best. I'll go C+.
Posted by Once a Cub at 9:00 AM