More randomness today from teams we haven’t seen yet.

First impression of what’s going on: Growing up, catcher was the one position I didn’t play. I’m a lefty and there was never a catcher’s mitt for me to use. But catchers always get my respect despite wearing the so-called tools of ignorance. This is a great shot of Yasmani Grandal, presumably fielding a bunt or maybe a dropped third strike. But why oh why oh why oh why, did Topps crop his throwing arm?!? I’m a week into this blog and I’m feel like a broken record on this. I understand his face is centered, but why not zoom out a few more pixels? 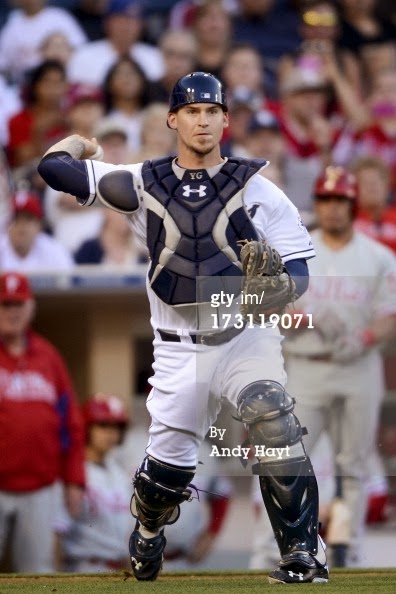 SAN DIEGO, CA - JUNE 25: Yasmati Grandal #12 of the San Diego Padres fields a bunt and throws to first base against the Philadelphia Phillies at Petco Park on June 25, 2013 in San Diego, California. (Photo by Andy Hayt/San Diego Padres/Getty Images)

The Reality of the Photo: You may not have noticed, but if you look closely at the caption copied and pasted from Getty, you’ll see Grandal’s name spelled wrong. His first name is spelled with a “t” instead of an “n” which made this picture a little more difficult to find. As I guessed, Grandal is fielding a bunt.

The caption doesn't give me a batter or inning so I’m going to have to dig a little deeper into the BOXSCORE to see what’s going on.

Looks like the Phillies pulled this one out from the host Padres. Did the small ball have any effect?

This sacrifice bunt by Ben Revere moved John Mayberry to second but didn’t end up inflicting any damage to the Padres. The only other bunt in the game came from the Padres offense, so it’s a pretty safe bet I’ve found the play.

Grandal really didn’t want Revere on base that day because after Revere walked in his next at bat, Grandal threw him out trying to steal second.

Grandal also had a decent day at the plate in the losing effort, going 2-4 and scoring a run.

His double in the second was one of the top five plays of the game.

Based on context clues, I’m going to say the Phillie behind Grandal on the right side of the card is on deck batter, Carlos Ruiz. He followed Revere’s sac bunt with strikeout.

Thanks to the giant Under Armour logo on the chest protector, this card also qualifies for Free Advertising credit. 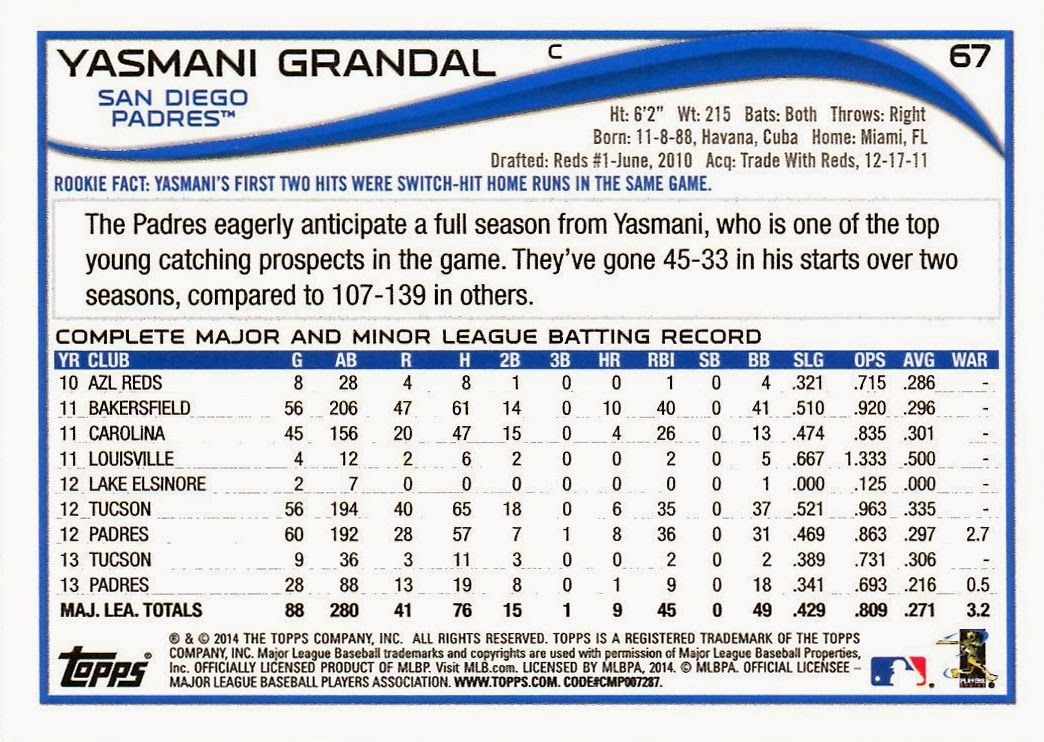 What!? Now that is a pretty good rookie fact. Grandal made his first start on June 30, 2012 and went deep in his third and fourth career at bats, but I can't tell which was as a righty and which was as a lefty. His first home run came ff Christian Friedrich, a lefty and the second off of Jeremy Guthrie, a righty. Switch hitting in itself seems like an incredible feat to me. To have home run power from both sides of the plate and be able to use it during the same game is just ridiculous.

Despite playing 60 games in 2012, Grandal only played 28 in 2013. I don’t know if he was injured, or if starting catcher Nick Hundley was the better option. The blurb on the card seems to think Grandal is ready to step in and take over.

My Grade: I’ll give this card a B. While there’s nothing particularly impressive about the play, catchers in action are much better than the standard batting pose. Grandal had a pretty decent game and the rookie fact was above average. If the crop was better, and another niche or two was met, I could see this card getting a B+/A-.
Posted by Once a Cub at 9:00 AM