Whoops, this prematurely posted earlier and I had to rescind it. Here it is again for those that didn't catch it then.

In honor of the Super Bowl yesterday I thought I’d show some baseball representatives from the areas involved. Earlier from the Seattle Mariners, I had Kyle Seager. From Colorado, I present outfielder Charlie Blackmon.

First impression of what’s going on: If Seager’s card was a good photo presented poorly, Blackmon’s card is a fairly boring photo presented well. Good crop and the purple is surprisingly nice. The eye black is one of my niches and the first of its kind this season. 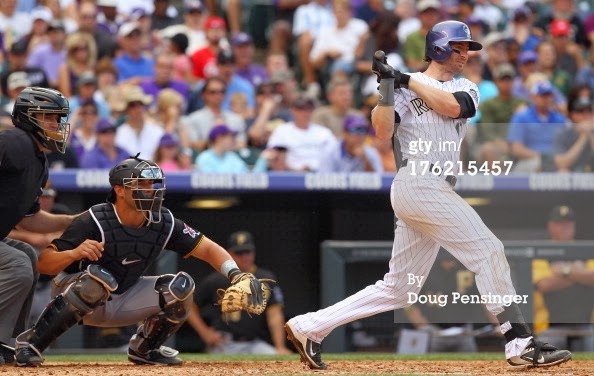 DENVER, CO - AUGUST 11: Charlie Blackmon #19 of the Colorado Rockies takes an at bat as catcher Tony Sanchez #59 of the Pittsburgh Pirates backs up the plate and umpire Bill Welke oversees the action at Coors Field on August 11, 2013 in Denver, Colorado. The Rockies defeated the Pirates 3-2 and swept the three game series. (Photo by Doug Pensinger/Getty Images)

The Reality of the Photo:  Man, talk about a Topps close up, cropping out the catcher and umpire. I even skipped over this photo twice when searching for it because it wasn't what I was looking for. This won’t happen very often, but I happen to agree with this particular extreme close up. I generally like photos like this but with the amount of distance `between Blackmon and the catcher and umpire, it wouldn’t have made for a good card. They may have been able to find a better photo, but Topps did pretty well with what they did pick.

The caption gives the game but not much else to help nail down the play. Let’s head over to the BOXSCORE.

Pretty close game there. Let’s see if Blackmon had any say in the outcome. 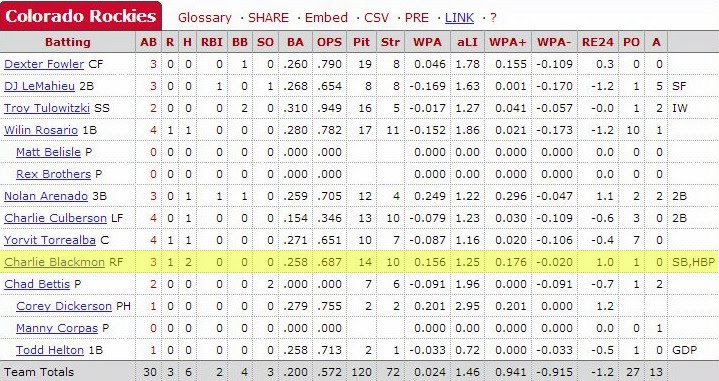 Two-for-three win a runs scored is pretty good. Also you may notice all the way on the right, Blackmon was also hit by a pitch. That was his plate appearance that led to him scoring a run. After he stole second and was balked to third, Blackmon scored on a sacrifice fly hit by former Cub, DJ Lemahieu. Another former Cub, middle reliever Manny Corpas got the win. 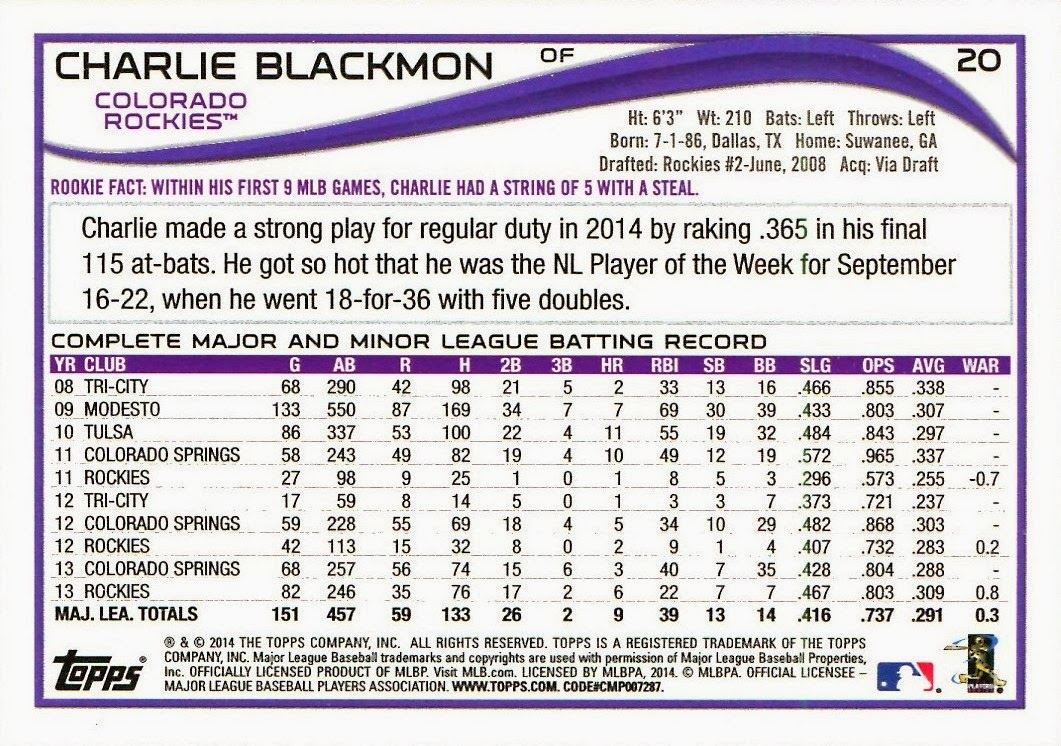 Rookie Fact: Within his first 9 MLB games, Charlie had a string of 5 with a steal.
I’ll admit I had to read this sentence a couple of times to understand what it what trying to say. What I think it was awkwardly trying to say is that Blackmon had a five game stretch with at least one stolen base, that happened to be in his first 9 games. So in his 5th-9th games. He did not have another during his other 18 games that season. And only had one in 47 games the next year. He did step up his base stealing again in 2013 with 7 in 82 games.

The blurb portion of the card makes mention of Blackmon making a run at becoming an everyday player. My first thought was why does Topps have a fourth outfielder in Series One? I even had to stop and think about whom else in the Rockies outfield was holding him back. Carlos Gonzalez. Dexter Fowler…uh that’s all I got. I know another former Cub, Tyler Colvin was jumping back and forth between AAA and the Rockies but that can’t be right. Another quick Baseball-Reference search showed me that Michael Cuddyer was roaming the right side. Oh yeah. And then three other outfielder played more games than Colvin. Oh…

My Grade: Unlike the Super Bowl, I think Colorado pulls out a squeaker over the Seattle card from earlier. Despite fewer niche collections this card fits into, I think it is a better looking card than the Seager. But still not great. This one gets a C+ too, but maybe a half percentage point higher.
Posted by Once a Cub at 6:00 PM