First impression of what’s going on: Standard pitching shot. It’s a bit too cropped for my tastes, but not quite enough to get the Unnecessary Censorship designation. I think this may be an alternate jersey as home jerseys are usually white and away jerseys have the city name rather than team nickname. But they are the Los Angeles Angels of Anaheim so maybe that doesn't fit. 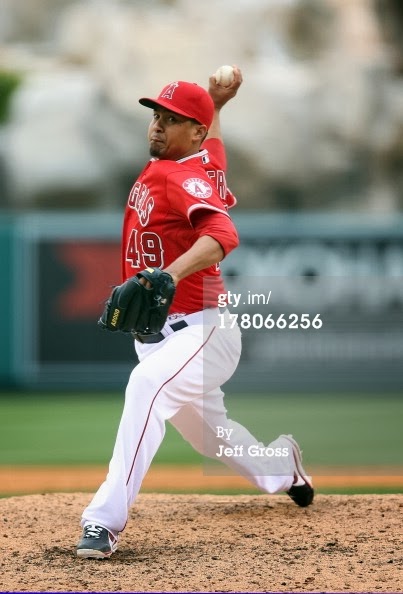 ANAHEIM, CA - APRIL 14: Ernesto Frieri #49 of the Los Angeles Angels of Anaheim pitches against the Houston Astros at Angel Stadium of Anaheim on April 14, 2013 in Anaheim, California. (Photo by Jeff Gross/Getty Images)

The Reality of the Photo: The caption doesn't give much to go on, no inning or batter. Luckily, Frieri is a reliever so that narrows it down a little. Let's look at the BOXSCORE.

Angels got the win, looks like a Save situation. Did Frieri get it? 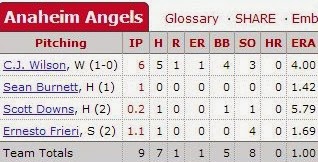 Yes he did. And he even struck out 4 batters in his inning and a third.

And one of those strikeouts was a Top 5 play. Must have been a rally killer.

Yes, again. Frieri came into the 8th with two on and two out in a one-run game to get Jason Castro to strike out swinging.

Josh Hamilton would add some insurance runs with a two-run homer in the bottom of the 8th before Frieri would shut down the Astros for good in the 9th. This was way back in April, so it earned Frieri his second of eventually 37 Saves on the year.

As for the uniforms, I was right about home jerseys being white. And while their away jersey is not red, they apparently do not use the city name. The red jersey is their alternate. 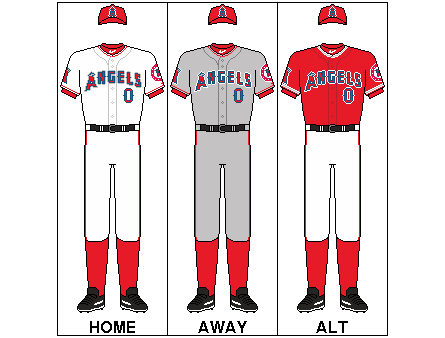 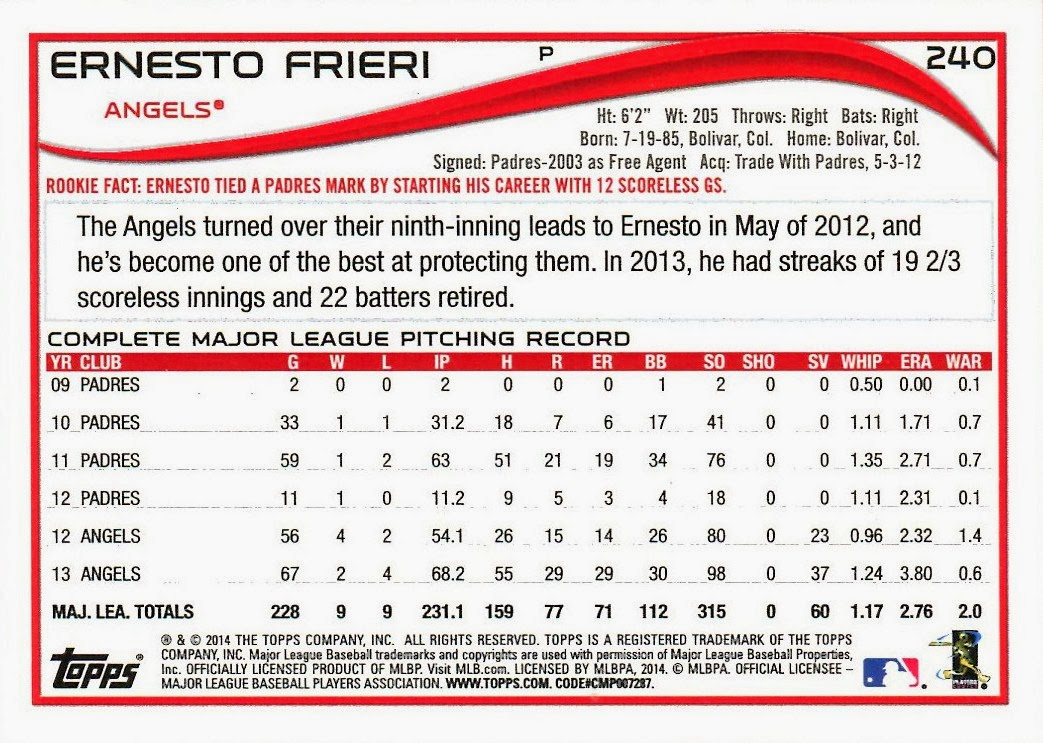 That can’t be right. If you start 12 games and don’t give up any runs, I think I would have heard about that. I remember Orel Hershiser back in the 1980’s chasing that record. I think instead of “GS” Topps must have meant appearances.

Counting his two innings in two appearances in 2009, Frieri didn't give up a run until his 13 game (not game started).

My Grade: This was a card that bored me at first glance. Just a standard pitching shot. The Rookie Fact was a little iffy. But looking deeper into the game in which the photo was taken, I was a little more impressed with Frieri. Just enough to bump this card from a D to a C-. There’s nothing horrible about this card but it just doesn't stand out in any way.