First impression of what’s going on: Today I’m double dipping on both Gregor Blanco and plays at the plate. Earlier, Blanco made a cameo on Brian McCann’s card and was thrown out at home. Now, on his own card, while it's much better looking overall, it's not looking good as far as scoring goes. 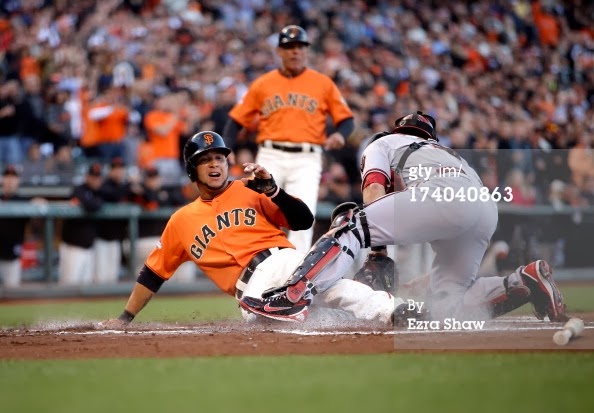 SAN FRANCISCO, CA - JULY 19: Gregor Blanco #7 of the San Francisco Giants safely slides under the tag of Miguel Montero #26 of the Arizona Diamondbacks to score on a double by Buster Posey #28 in the first inning at AT&T Park on July 19, 2013 in San Francisco, California. (Photo by Ezra Shaw/Getty Images)

The Reality of the Photo: Mark your calendars, guys, I was wrong! At least according to the caption, it says Blanco slid in under the tag. Call me a skeptic, but we’ll have to see the BOXSCORE first.

Ok, they did score twice in the first inning.

And after leading off the inning with a walk, Buster Posey did in fact drive Blanco home with a double.

Since it was the game winning run (all the way from the bottom of the 1st), it was the top play:

The Giants wore their orange alternate jerseys for this game, a Friday night home game standard in 2013. 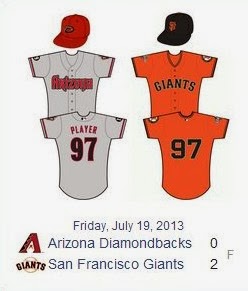 And courtesy of Diamondbacks catcher, Miguel Montero’s cleat, we get some Free Advertising in the form of a Nike swoosh logo.

He is not credited in the photo caption, and only makes a cameo from the waist down, but I think the Giant standing behind the sliding Blanco is third base coach, Tim Flannery. 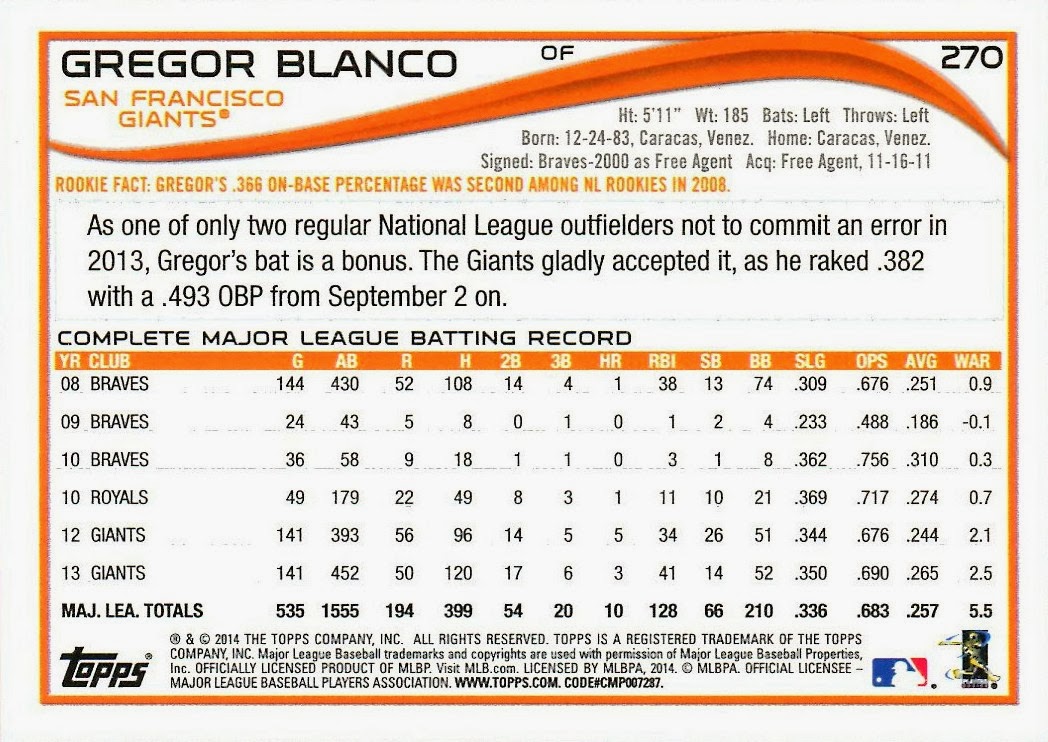 I don’t know what the official minimum is, but I plugged in NL Rookies with at least 250 Plate Appearances over at Fangraphs.com, sorted by OBP and came up with this top 5:

I guess Topps’ threshold is slightly higher than mine because they’re not counting Martin Prado. Which is fine by me because the next four guys more than doubled Prado’s PA’s. So it looks like by Topps' standards, Blanco came in second behind Joey Votto of the Reds.

As for the blurb, the other errorless regular NL outfielder was the Washington Nationals’ Denard Span.

My Grade: This card hits several key niches and with the safe call at home, deservedly gets an A+.

In fact, this card had so many labels, it wouldn't let me use them all. I had to remove Arizona and San Francisco from the team names to get them all to fit. Now for the sake of uniformity, I have to go back and adjust all of the other team names. Good thing this happened fairly early and not 500 cards in. I will be going back through all of my previous posts this weekend to make sure each post is properly tagged because I think I have forgotten a few photographers and stadiums, too. I'll also be adding each card's grade as a label so you'll be able to find all the A+ cards (or whatever grade you want to see) at a glance.

Tomorrow, I have the final two, thus far unrepresented teams. As a Cubs fan, it figures they're both NL Central teams. Ha! Then I'll probably go completely random again.