Yesterday I had Chris Davis. Not to be confused with today’s Khris Davis.

First impression of what’s going on: We've got a nice action shot here, leaping at the wall to stop a home run, or at least an extra base hit. The slightly too tight crop will keep it from a no doubter A+, but let's see if we can't find enough to make sure he gets an A. If he ended up making the catch, there's not much to stop it. Normally I root against the NL Central rival Brewers, but I’m kind of hoping this one does well. A great card is a great card. 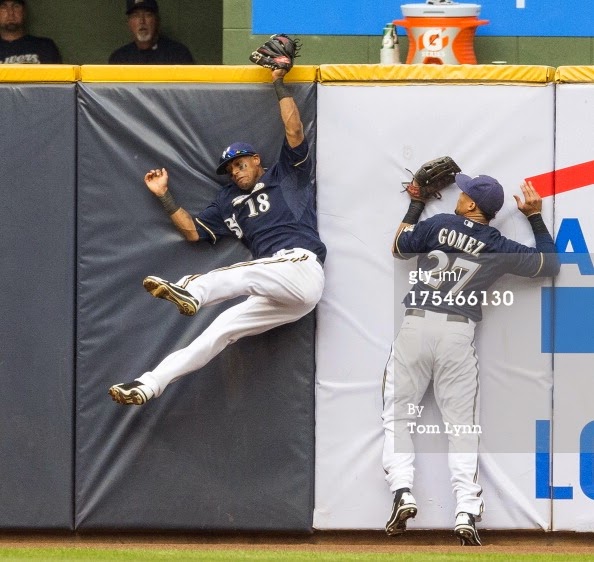 MILWAUKEE, WI - AUGUST 3: Khris Davis #18 of the Milwaukee Brewers makes a catch at the wall on a ball hit by Ryan Zimmerman #11 of the Washington Nationals, as teammate Carlos Gomez #27 looks on in the third inning at Miller Park on August 3, 2013 in Milwaukee, Wisconsin. (Photo by Tom Lynn/Getty Images)

The Reality of the Photo: Well, according to the caption, he made the catch. So I can stop now, right? Nah. It was only the third inning, but we might as well look at the BOXSCORE to see if it was a close game and potentially one of those “game changer” moments early in the game.

Nope, but I’m sure Brewers starting pitcher Donovan Hand is happy to keep his ERA a little lower, despite taking the loss.

The Brewers were at home and not wearing white, so it appears Davis is wearing an alternate jersey. 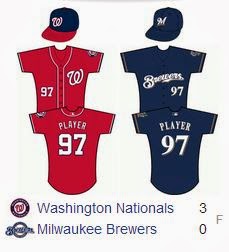 With this record though, they may want to try something different this year. 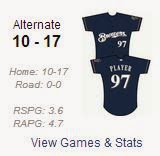 Davis also makes into some collections with Eye Black and Sunglasses (on his hat). No niches for the expression, sorry.

Also not making the final cut were Cameos and Free Advertising. Teammate Carlos Gomez and a pair of bullpen guys were cropped out of the original picture. The same goes for the Gatorade jug and cups. 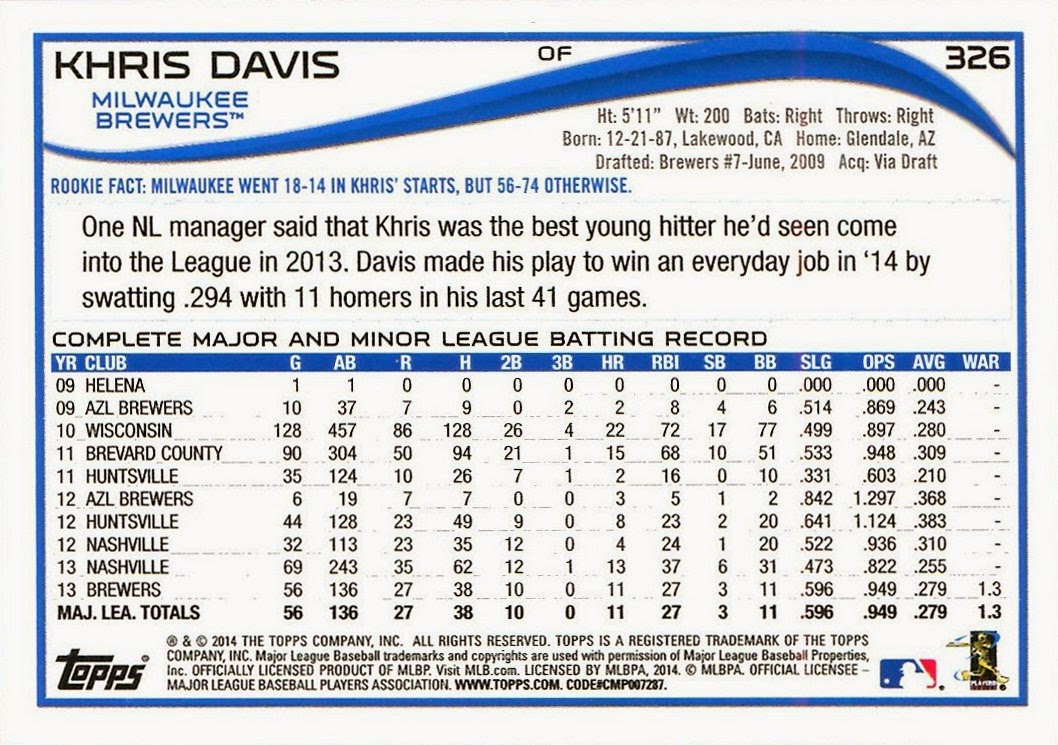 I’m not real impressed with this back. No real individual statistic, although it’s always good to help your team. And actually, the Brewers were 30-26 with him in the lineup, so it wasn’t just his ability to start. According to Baseball-Reference, Davis had 6 “go-ahead” hits when the game was either tied or the Brewers were behind. That seems pretty good for a rookie. To have the confidence of your manager to hit in that situation and then actually come through.

My Grade: I can comfortably give this card an A. Those extra niches may have even helped it overcome the cropping for an A+, but unfortunately not the lackluster backside. The front has to carry a lot of weight and luckily, it does.
Posted by Once a Cub at 12:00 PM