After taking my normal Sunday off from posting to do a little blog maintenance by updating links and such, I’m back today connecting Saturday’s card to today’s through the Players Named Matt Niche. It’s also been a while since I posted anything about the Red Sox. One Jonny Gomes card early on and they haven’t even been an opponent on any of the other cards.

First impression of what’s going on: This seems to be a candid shot, taken between pitches. I don’t know if he's getting signs, waiting for the next batter or what. He looks a little tense though. The crop is, as usual, a little too tight. 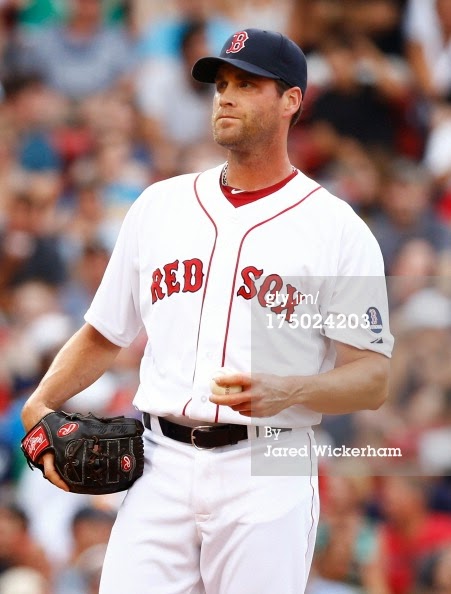 BOSTON, MA - JULY 20: Matt Thornton #38 of the Boston Red Sox pitches against the New York Yankees during the game on July 20, 2013 at Fenway Park in Boston, Massachusetts. (Photo by Jared Wickerham/Getty Images)

The Reality of the Photo: Ah, a Red Sox-Yankees rivalry game. That’s probably enough to make you tense. And as a relief pitcher, it’s probably even more pressure. Let’s take a look at the BOXSCORE.

Uh-oh. I don’t know when Thornton came into the game, but it looks like the Red Sox bullpen may have blown this game. Or they left the starter in too long.

Well, Thornton gave up two hits but no runs so that’s good for him.

Oh. Whoops. Looks like he inherited a couple of runners who scored on the two hits that Thornton gave up. And one of them was the eventual game winner.

Despite the not-so-good appearance, Thornton does have a couple of niches going for him, including two instances of free advertising.

He sports the all too common Nike undershirt with the swoosh by his neck. And in the lower left corner we see a pair of Rawlings logos on his glove.

And while the reasons behind a commemorative patch are always sad, Thornton has the Boston Strong patch on his left sleeve. 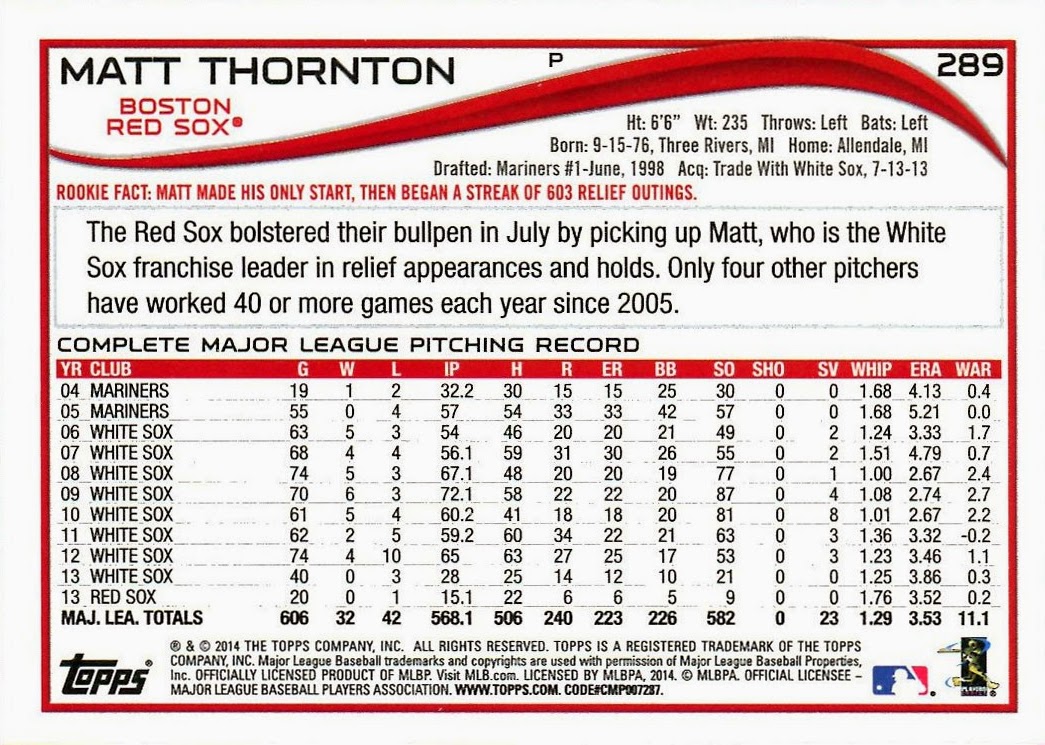 Rookie Fact: Matt made his only start, then began a streak of 603 relief outings.

I took this to mean his first appearance was a start and then he was permanently moved to the bullpen. But after seeing this chart on Baseball-Reference I was confused when I saw the total games played.

Although the wording is technically correct in the Rookie Fact, apparently Thornton made two relief appearances before making a start and then moving to the bullpen for good. Not a big deal, just walking you through my process.

And the number 603 stuck out at me because I know it’s right around Mariano Rivera’s record breaking Save total, which made me wonder how many appearances he had to make to get there. Guess I’ll have to wait until I get to his card…

My Grade: This card hit a couple of niches to give it the collectability factor, but as far as the picture and the story behind it, they’re a little lackluster. I like pictures where the batter isn’t just swinging and the pitcher isn’t just going through the motion, but just standing there isn’t that great either.