First impression of what’s going on: Personal feeling about Alex Rodriguez aside, this card is…eh. I’m tying it together with yesterday’s Oswaldo Arcia card through the fist pumping celebration they showcase. But unlike Arcia's, Rodriguez’s card takes place on the defensive side of the ball. He could have just made a play himself or it could be one of those where the game just ended and everybody’s happy. He could have found out he just “passed” another drug test. Without any context from a wider angle shot, I have no clue. 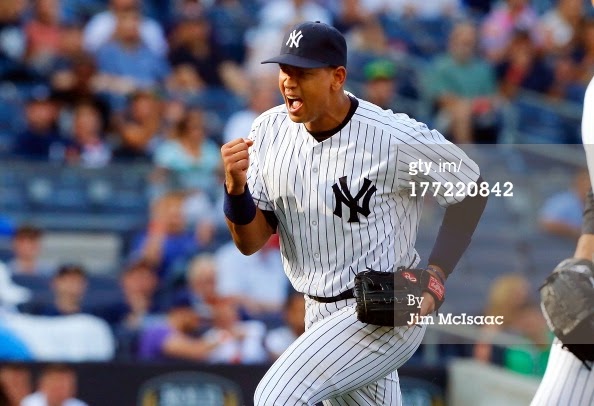 NEW YORK, NY - AUGUST 22: Alex Rodriguez #13 of the New York Yankees reacts after throwing out Brett Lawrie #13 of the Toronto Blue Jays to end the fourth inning at Yankee Stadium on August 22, 2013 in the Bronx borough of New York City. (Photo by Jim McIsaac/Getty Images)

The Reality of the Photo: Wow! We actually get the exact play from the caption. I thought this was going to be an inconclusive photo with a generic caption. Topps did have more room on the right to not crop out A-Rod’s arm but do we expect anything less by now?

An inning ending ground out isn't something normally celebrated like that so let’s check out the BOXSCORE and see if it was a close game or a clutch play.

It was still scoreless and only the fourth inning. Maybe A-Rod really didn't have a lot to celebrate in his life so a ground ball is that important.

According to the inning summary, the Blue Jays had a runner on third and A-Rod’s 3B counterpart, Brett Lawrie hit the ball to weak third base. I guess I can cut A-Rod some slack for celebrating a little because it was a play that if he doesn't make, the Blue Jays get a run and still have a runner at first.

But here’s a plot twist for you.

If I’m interpreting the inning summary correctly, in the bottom half of the inning, A-Rod hits a ball that deflects off the pitcher to Lawrie, who proceeds to throw A-Rod out at first. Without seeing videos of either play, it kind of sounds like Lawrie one-upped him for a little karmic payback.

There’s not much going on in the photo to qualify many other niches. As classic as the Yankees pinstripes are, we don’t get to see anything else on the uniform that make some of the other cards so interesting. Even A-Rod’s arm bands are logo-less, from this angle at least. We do get to see that his glove preference is Rawlings with a small logo peeking out. 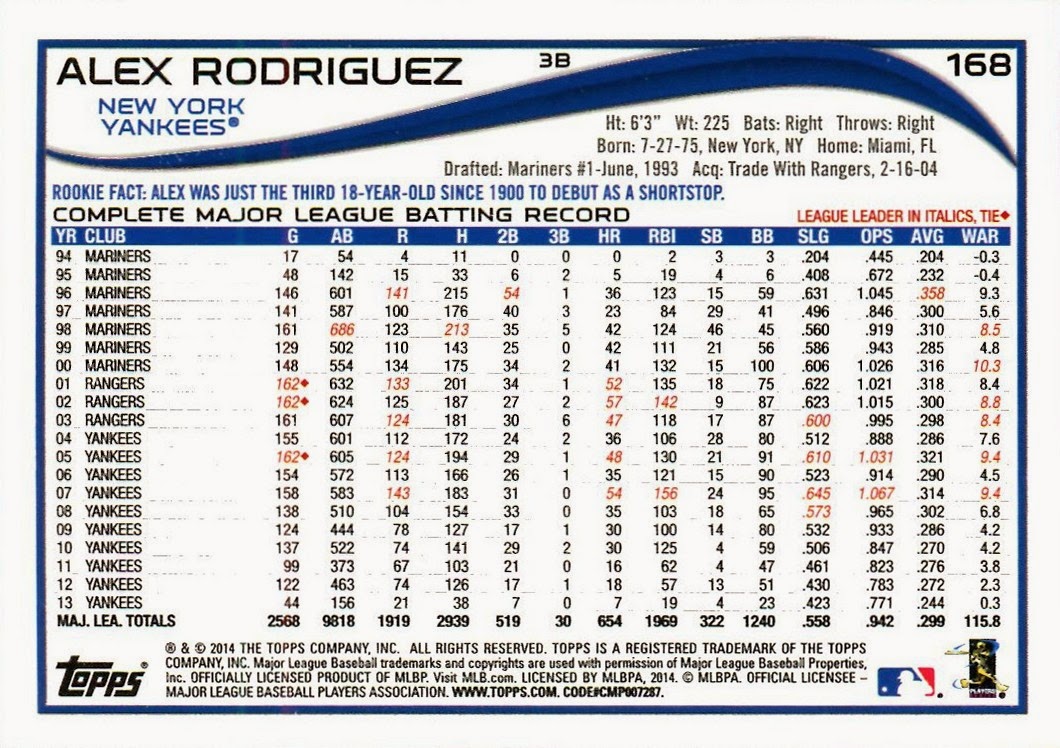 Rookie Fact: Alex was just the third 18-year-old since 1900 to debut as a shortstop.

So I found a list of the youngest player in the league for each year, but it didn't list it by position. And there could be an 18-year-old shortstop that wasn't the youngest in the league so I’m not sure how helpful that is. I’m pretty sure Robin Yount is one of the other two guys, but I’m a little too lazy to look any further.
With A-Rod’s tenure, there's no room for a blurb. We get a lot of red text which is usually pretty good. Unfortunately, most of it should probably have an asterix. And in the words of Forrest Gump, “that’s all I have to say about that.”

My Grade: Even admitting a slight bias against Alex Rodriguez, I’m not sure I can justify giving more than a B- to this card. Nothing about it excites me. The photo is pretty good, capturing what was probably a fairly quick fist pump after a bang bang play. But the crop isn’t great. The back is full of gaudy stats but I don’t think I have to explain why that’s not impressive either. Meh.