Since I waited so long to do the Reds, I’ll go back-to-back with them.

First impression of what’s going on: Again, I’m not good with other team’s alternate vs. throwback uniforms but this one has an old-timey feel to it. The crop is ok, better than most Topps has done, but still a little too zoomed in, cutting off his right elbow. 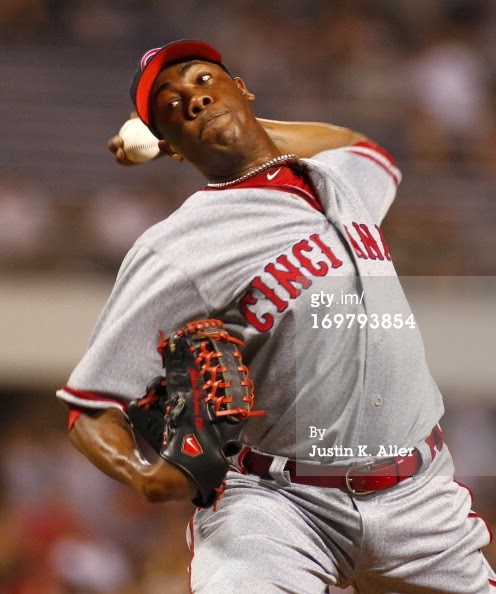 PITTSBURGH, PA - JUNE 01: Aroldis Chapman #54 of the Cincinnati Reds closes out the game against the Pittsburgh Pirates during the game on June 1, 2013 at PNC Park in Pittsburgh, Pennsylvania. (Photo by Justin K. Aller/Getty Images)

The Reality of the Photo: Like the Leake photo from yesterday, this is another really nice photo, if you’re a Reds fan. The subtle red in the uniform really pops against the grey and there’s nothing in the background to distract from Chapman. The caption doesn’t give much information so as usual, let’s check out the BOXSCORE.

Despite giving up 10 hits, the Reds shut out the Pirates, so it looks like Chapman got the Save.

Wow, three pinch hitters for the Pirates. I guess if you’re not scoring with the guys you got out there, the last of the 9th is the time to pull out all the stops. Despite a single and a walk, Chapman maintained the shutout, earning his 14th Save on the season. Coincidentally, yesterday’s subject, Mike Leake was the starter and earned the win.

As for the uniform, it was a throwback. Both teams wore Negro League tribute uniforms as shown below.

This was the only time last season the Reds wore this uniform, going a perfect 1-0 with this win.

And for a little Free Advertising, it looks like Chapman is a Nike guy. Sporting “swooshes” on his glove and undershirt, Chapman gives a double shoutout. There’s also a little bit of self-promotion with his name stitched on the glove. 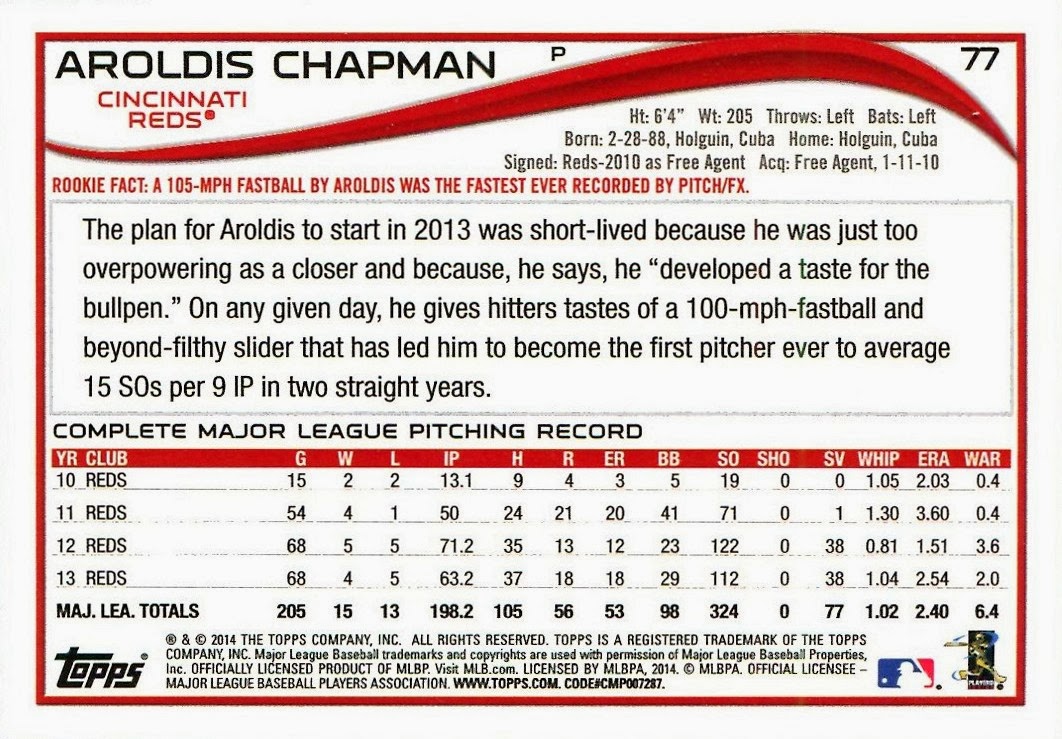 Rookie Fact: A 105-MPH fastball by Aroldis was the fastest ever recorded by Pitch/FX.

What is Pitch/FX you ask? Well, here’s a handy dandy LINK to the FanGraphs explanation because I was curious myself. It mentions that it has been installed in every MLB stadium since around 2006. I don’t know if anyone has thrown faster than that, but having the fastest pitch in the past 8-ish years is till pretty impressive. Especially for a rookie.

My Grade: I have nothing against Chapman except that he plays for the rival Reds. The only time I see him play is against my Cubs so if he’s not in the game, that’s a good sign for my Cubbies. The card itself doesn’t have much going for it but the throwback uniform carries a lot of weight. Enough to bring it up from an average C to a B-.
Posted by Once a Cub at 12:00 PM