First impression of what’s going on: I don’t know if the Topps photo selector is from Oakland or what, but it’s going to be hard to argue that the A’s don’t have the best cards in the set this year. Even something as simple as running the bases looks pretty cool in those bright yellow jerseys. This card might not crack the top three from Oakland’s team set but could still beat several of the best cards from other teams. 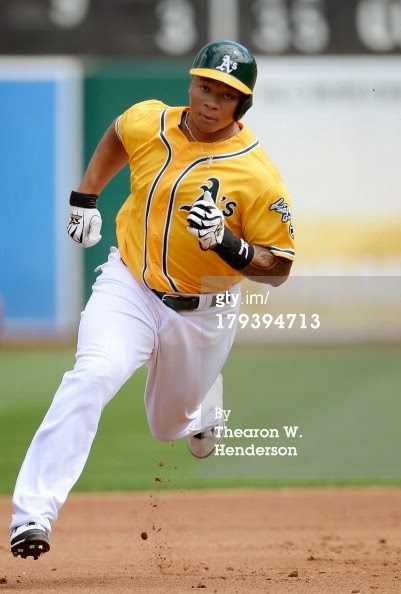 OAKLAND, CA - SEPTEMBER 02: Michael Choice #35 of the Oakland Athletics runs the bases against the Texas Rangers at O.co Coliseum on September 2, 2013 in Oakland, California. (Photo by Thearon W. Henderson/Getty Images)

The Reality of the Photo: The crop on this one is pretty good. Choice’s entire upper body is in the fram eand Topps made a good choice on where to crop along the bottom. The expression isn't one of exertion so I wonder if this is a home run trot? He is leaning but I don’t know if that means he is running hard or if he’s just about to round third. Let’s go to the BOXSCORE.

An A’s victory is a good sign for Choice. Let’s see how he did at the plate and on the base paths. 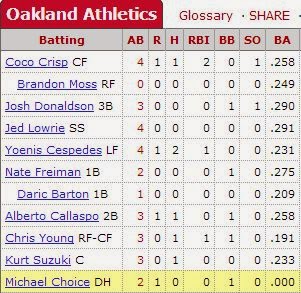 Interesting. How often do you see the the DH batting last in the lineup? And batting .000 in a game in September? I know the card says he’s a rookie but I wonder how far into his career this is?

In the bottom of the third, Choice walked but didn't make it past first base.

Choice led off the bottom of the fifth by beating out a ground ball and errant throw from the third baseman. Coco Crisp followed that up with a home run, with Choice being the eventual game winning run. Nice! I’m guessing this is what the photo shows. So I was half right. It was a home run trot, just not Choice’s home run. He would line out in his final at bat.

I already mentioned the A’s bright yellow jerseys, but here is where I confirm they are in fact alternates. 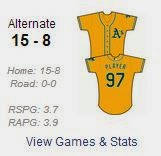 Choice will also get credit for a little Free Advertising by showing off his Mizuno batting gloves and wrist band.

Another niche we haven’t seen in a while that will probably become more prevalent are Tattoos. 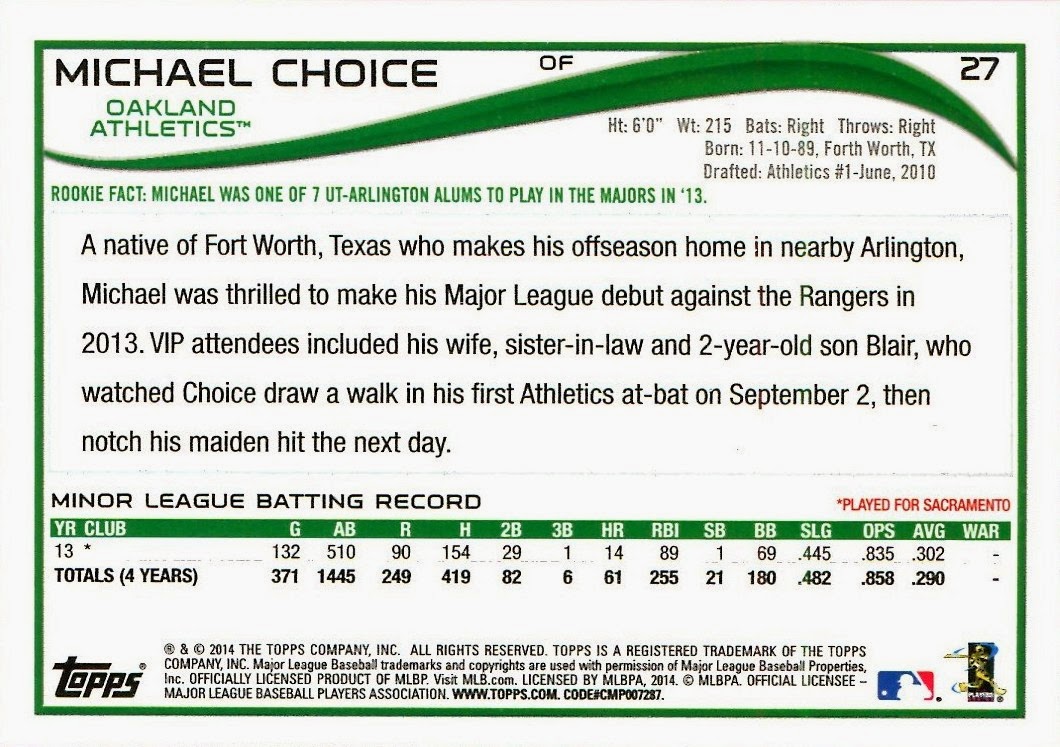 Rookie Fact: Michael was one of 7 UT-Arlington alums to play in the Majors in ’13.

I don’t know what the record would be, but that sounds like a lot. I found an all-time list on Baseball-Reference.com and sorted it by the last year played and came up with 18 players somewhere in pro-ball that came from UT-Arlington. The bolded players below are the seven that played in the Majors. 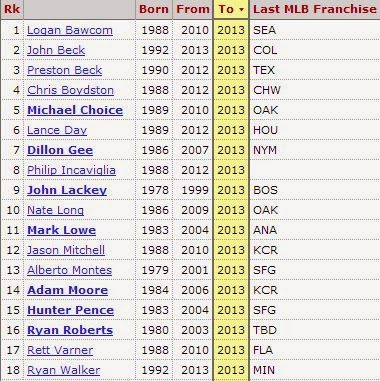 And then we get to the blurb where it confirms that this September 2, 2013 game featured on the front was indeed his MLB debut, in front of his friends and family. So to recap, in his MLB debut, he walked, hustled on a ground ball which might have caused a hurried, errant throw and would score the game winning run. Not a bad day at the office on any day, let alone a debut.

My Grade: Usually I reserve my A+ grade for “no doubters” where you instantly look at a card and know it’s awesome. For me, this one was an A at first glance. The crop is good, the alternate jersey is cool. The running “pose” is one that isn't quite overdone yet.  I even said it would be the best card on another team. But learning more about it made me like it even more and there’s only one grade higher, an A+.
Posted by Once a Cub at 12:00 PM