I think going forward I’ll find something to tie cards together for consecutive posts and then link another card through a different attribute. Kind of a six degrees of Kevin Bacon thing but with cards. Let’s see how long I can keep it going. From Mike Leake (Reds) to Aroldis Chapman (also Reds) to…

First impression of what’s going on: Bringing Chapman and Lonnie Chisenhall together are Throwback uniforms. As much as I like the Reds versions, this Cleveland Indians one is bad. So horrendous, it almost comes back around to glorious. We've got a couple of cameos but I don’t know enough about the Indians or umpires to recognize them. If I had to guess, this is probably a home run but could be just about anything. For the umpire to be where he is, it must be one of those “No Doubters” I mentioned in a previous post. Probably not a walk off though, as the on deck guy isn't jumping around or anything. Surprisingly, this is also one that Topps could have actually cropped a bit tighter. 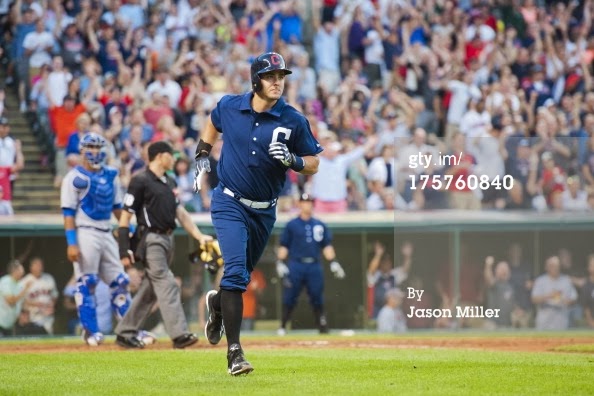 CLEVELAND, OH - JULY 13: Lonnie Chisenhall #8 of the Cleveland Indians runs the bases after hitting a grand slam home run during the sixth inning against the Kansas City Royals at Progressive Field on July 13, 2013 in Cleveland, Ohio. (Photo by Jason Miller/Getty Images)

The Reality of the Photo: Ok, a grand slam. You’d think the on deck guy would be a little more excited! But since the caption didn't give the final score, maybe the Indians were still down by five, even after the grand slam. So let’s check out the BOXSCORE.

And as the top play of the game, it raised the probability of the Indians winning by a staggering 21% to 98%. That’s pretty high considering it was only the 6th inning. That percent would creep back down after the Royals tacked on a few runs, but the end result was an Indians win.

A peek at the inning summary shows that after a single, a double and an intentional walk (with two swinging strikeouts mixed in), Chisenhall drilled the first pitch he saw to drive everybody in. This was his first career grand slam.

As for the jersey, Chisenhall and the Indians are sporting the 1902 Indians jersey. This was the only game these were worn this season. 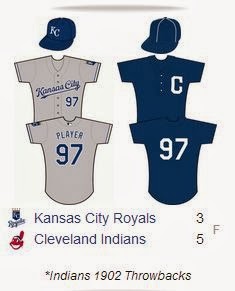 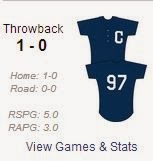 Back to the boxscore, I’m concluding that the Indian in the background is Yan Gomes, the #9 hitter in the lineup behind Chisenhall. Any Indians fan care to verify that? Also according to the boxscore, the home plate umpire for the game was Dan Iassoga. The Royals catcher that was cropped out of the card but still shows up in the photo is Salvador Perez. 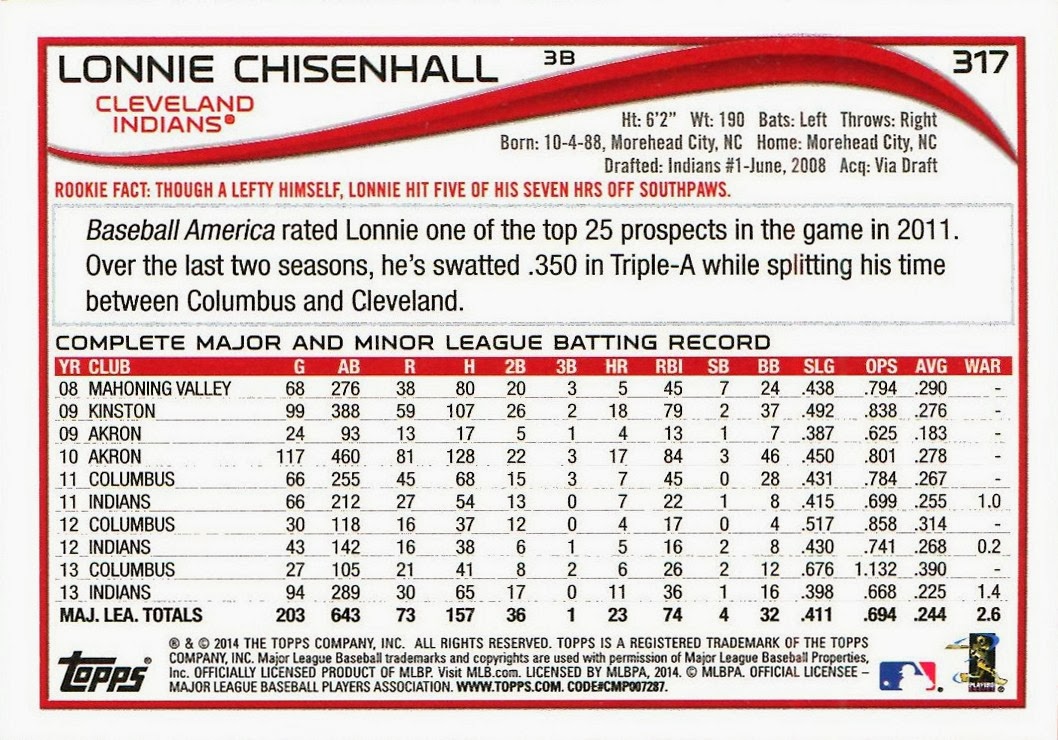 Rookie Fact: Though a lefty himself, Lonnie hit five of his seven homeruns off of southpaws.

I guess there’s some sort of statistical analysis about this, but as a lefty myself, I always liked hitting against left handers, too. Between the fact and the blurb there isn't much for me to look into. Oh well. Good thing the front was exciting. But for those curious, a pair of his first seven home runs came off lefty Mark Buehrle in the same game.

My Grade: This card is easily one of the best of the Series. It hits several of the bigger niche collections. The questions is, does it deserve an A+? The weak back side is the only thing keeping me on the fence. And to me, an A+ is a “No Doubter” so this card has to settle for merely an A.
Posted by Once a Cub at 12:00 PM