This wraps up a sample for each of the 30 teams. After this, because of the difference in the cards per team ratio, they’re may be team repeats before others.

First impression of what’s going on: Standard swing follow through, slightly mis-cropped. Meh. I say this as a card collector, not as a fan of the rival Cubs. At first glance the only niche this might fill is Pitchers at the Plate. There's some pine tar on the helmet. Enough that I noticed, but not quite Manny Ramirez proportions (look here and here). Does anybody have a pine tar mini collection? If somebody cops to it, I’ll add it as a niche. I know somebody or two collects cards that show name plates and or numbers from jersey backs but this one doesn't quite get either in full. 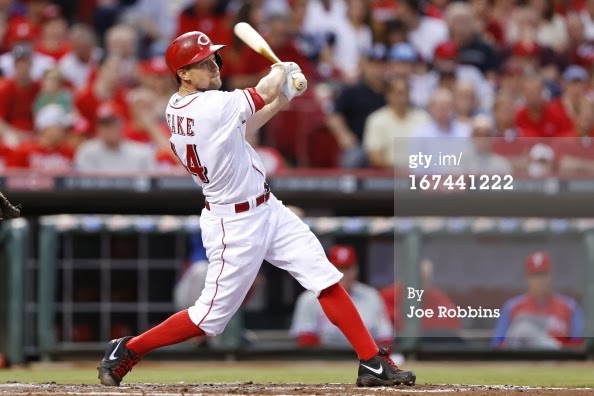 CINCINNATI, OH - APRIL 17: Mike Leake #44 of the Cincinnati Reds bats during the game against the Philadelphia Phillies at Great American Ball Park on April 17, 2013 in Cincinnati, Ohio. The Reds won 11-2. (Photo by Joe Robbins/Getty Images)

The Reality of the Photo: The photo itself is a nice shot, even if it wasn't a pitcher. If I collected signed photos and/or Reds stuff, I’d have it in my collection. With the tight crop, you miss the high socks. And the Free Advertising of Nike on his shoes. We know the Reds crushed the Phillies from the caption but maybe Leake had a great day at the plate and made this special. Let’s go to the BOXSCORE.

Not quite. But he did go 3 for 4, including an RBI triple and scored three runs himself. Nothing like helping yourself out at the plate when when you’re not pitching a real gem.

What’s that? Oh it was a gem? Seven innings of scoreless, three-hit baseball. Fine, Reds fans. He had a great game. Are you happy now? LOL 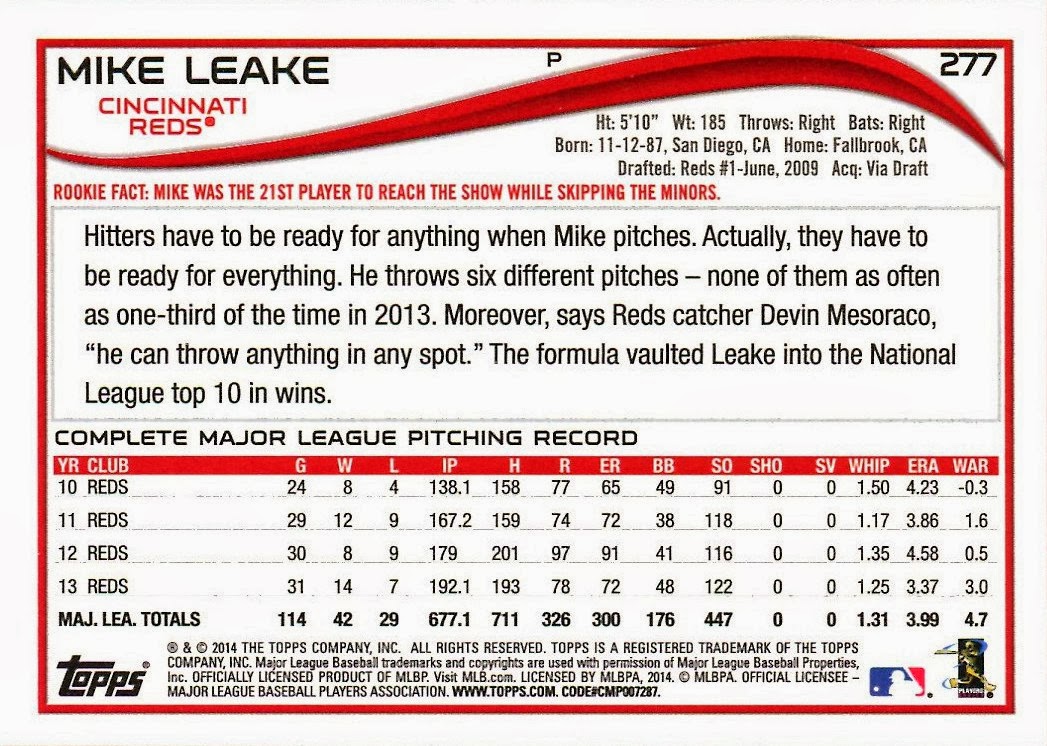 Rookie Fact: Mike was the 21st player to reach the show while skipping the minors.

So I went looking for a list of the other twenty players to reach the Majors without playing in minor leagues and got confused along the way. The first link that popped up was courtesy of WIKIPEDIA but it had a list of 90+ players. It mentions that some of the players may have later played in the minors for rehab, demotions or other various reasons. And anyone who has been to college in the last decade knows, Wikipedia is a great source, but not one you can necessarily get away with citing.

Another LINK  from 2007 (pre-Leake) had a list of 19 players and stipulated that these were since the First Year Player Draft in 1965. Going back to the Wiki list, most of the players were from before that time. I’m guessing this was the criteria used by Topps when constructing the Rookie Fact. But if this list has 19, and Leake was the 21st, who was number 20? Inquiring minds want to know.

Finally, I came across a link from BASEBALL-ALMANAC.COM that, in my opinion, gives a definitive answer as a trusted source. There wasn’t anybody between #19 Xavier Nady and #21 Mike Leake. According to this list, Nady is actually #20 as the previous link neglected Darren Dreifort of the Los Angeles Dodgers in 1994.

I’m trying to get better about citing my sources, but if you don’t want to click the links I provided, here’s the screenshotted chart from Baseball-Almanac.

My Grade: This card didn’t wow me right off the bat. A standard batting pose, but wait! It’s a pitcher! Different, although not altogether unique. Leake did have a hell of a game, both from the mound and at the plate. That’s got to count for something, right? The Rookie fact provided some interesting information, and intrigued me enough to do some more research. Maybe if he was dropping down a bunt, I could justify an A, but it’s going to have to settle for a solid B.

If somebody can show me a Pine Tar mini collection, maybe I’ll bump it up to a B+.
Posted by Once a Cub at 12:00 PM