First impression of what’s going on: I know there are quite a few fans of the players that wear the Tools of Ignorance, but as a lefty, it was never a position I gravitated towards. I can appreciate them but as for collecting them specifically, I could take ‘em or leave ‘em. But here we have a Cub so I would definitely be taking this one.

It’s a nicely cropped action shot. It could be a dropped third strike or a bases loaded double play but with the player in the background, it’s more likely to be a bunt. If I had to guess, I’d say that’s one of the Cubs rotating third baseman in 2013, #1 Cody Ransom. The boxscore will probably tell me definitively. 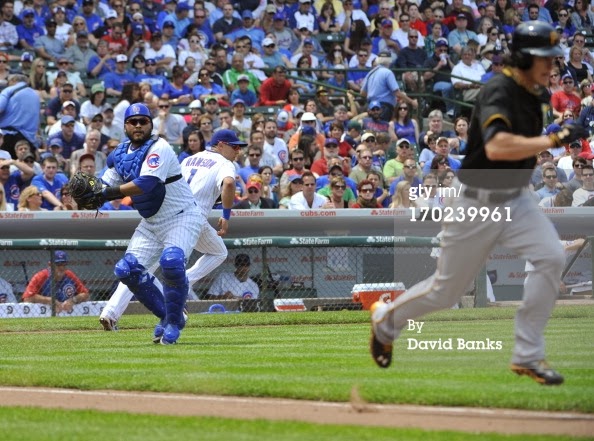 CHICAGO, IL - JUNE 9: Dioner Navarro #30 of the Chicago Cubs fields a sacrifice bunt by Jeff Locke #49 of the Pittsburgh Pirates during the third inning on June 9, 2013 at Wrigley Field in Chicago, Illinois. (Photo by David Banks/Getty Images)

The Reality of the Photo: The caption confirms a bunt attempt and while it doesn't mention Ransom, the photo of him is much clearer than on the card. I assumed Topps does some touch up work on cards to make the pictures show up better (lightening and such) but never really thought about them blurring out backgrounds. It look like Navarro beat Ransom to the ball so Ransom is racing back to cover third to prevent runner(s) from advancing further. The original photo also shows the bunter, Pirates starting pitcher, Jeff Locke.

The caption calls it a sacrifice bunt so Locke was out at first. But did the sacrifice pay off? There’s no mention of the final score so let’s check out the BOXSCORE.

Cubs Win! Cubs Win! Since the sacrifice happened in the third inning and the Pirates did not end up scoring, let’s see how it all went down.

Clint Barmes was the lead runner on the sacrifice and only managed to make it third base before the inning ended. 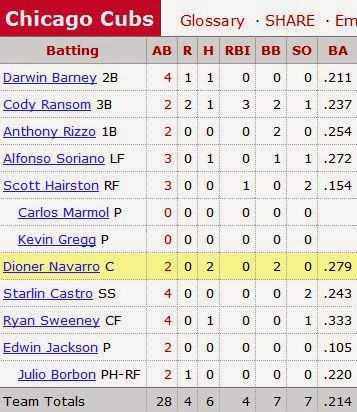 At the plate, Navarro went 2-for-2 with two walks. Unfortunately, the Cubs weren't able to capitalize on his perfect day at the plate but managed to win anyway. At this point in the year, Navarro was only batting .279 but by the end of the season, he finished with a nice round .300.

Just above the Cubs logo on the card, the shoulder that’s nearly cropped all of the way out belongs to pitching coach Chris Bosio. He can be seen more clearly in the original photo. I can’t make out the other Cubs player in the dugout though, just beyond Cody Ransom’s knee.

While the Gatorade logos in the dugout are cropped out and the State Farm insurance logo on the dugout are blurred with the rest of the background, there is still a bit of Free Advertising. Navarro is clearly using a Wilson catcher’s mitt.

And Nike swooshes make not one, not two, but three appearances on Navarro’s catcher’s gear. He’s a walking billboard! 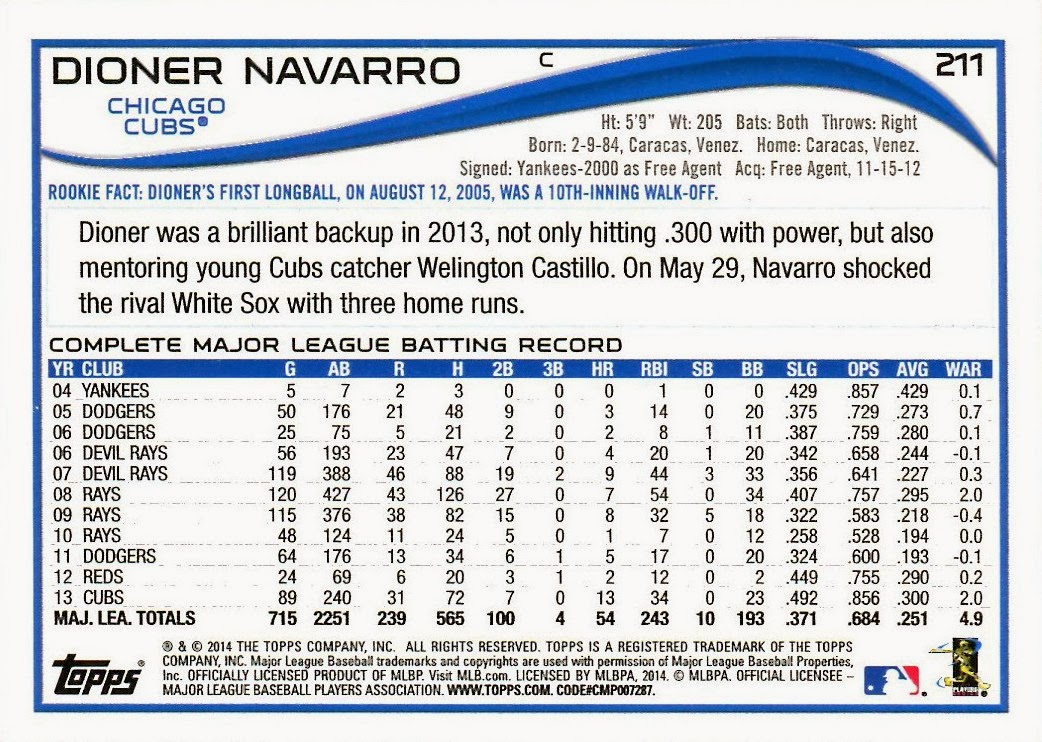 Here’s a link to the BOXSCORE of that game. While I didn’t see anything on Getty Images from that moment, here are some photos from rival APIMAGES.COM.

Lost in the crowd celebration as he scores:

My Grade: This might be my Cubs bias coming through but I'm going to give this card an A-. The cropping/framing is excellent. There's a good action shot with a cameo. If Ransom wasn't intentionally blurred out, that might have helped the grade a little. The runner is a bit too far away to justify trying to make it a horizontal card, but that would have been pretty cool. Navarro is also the first switch hitter I've come across.

The back blurb mentions his three home run performance against the cross town White Sox. I'm not a Chicago native so I wasn't raised with a love-the-Cubs-hate-the-Sox mentality and have no ill will towards the Sox or their fans. But it is always nice to do well in as rivalry game.

Good luck to Dioner in Toronto his season!
Posted by Once a Cub at 12:00 PM