First impression of what’s going on: Tying these two cards together are the cameos. Chisenhall had a guy on deck and an umpire. Ellis' card has the lead runner in what looks to be a double play. This card is going to hit a lot of niches but I don’t know how I feel about that. Could Topps really not squeeze in two or three more pixels to get Ellis’ throwing pinkie in the frame? 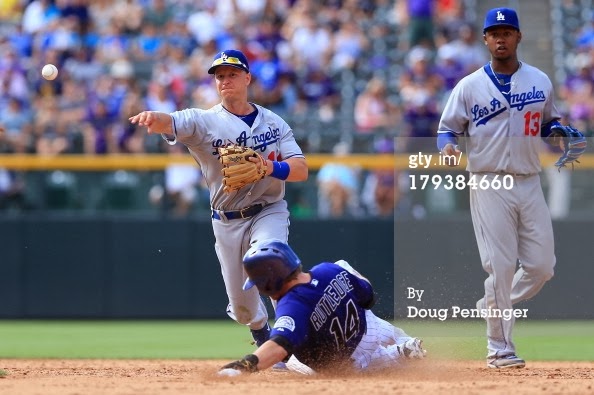 DENVER, CO - SEPTEMBER 02: Second baseman Mark Ellis #14 of the Los Angeles Dodgers turns a doube play on Josh Rutledge #14 of the Colorado Rockies as shortstop Hanley Ramirez #13 of the Los Angeles Dodgers watches in the sixth inning at Coors Field on September 2, 2013 in Denver, Colorado. The Dodgers defeated the Rockies 10-8. (Photo by Doug Pensinger/Getty Images)

We also get to see Dodgers shortstop, Hanley Ramirez who was cropped out of the card and the caption credits him as “watching” the double play. That makes me wonder if this actually was a 4-3 double play that Ellis handled on his own or if Hanley is watching after feeding the ball to Ellis for a 6-4-3 twin killing. Guess we’ll have to check out the BOXSCORE.

The Dodgers were winning 8-5 at this point in the game, so a double play was definitely crucial to stopping a potential rally. Let’s see how it went down.

Wow. The Rockies had runners on first and third with no outs and the Dodgers managed to get out of it. Thanks in part to Mark Ellis and the double play. And as you can see, Ramirez did more than just “watch” the play.

I mentioned that this card qualifies for a couple of niches so let’s break those down. From the top down, we have sunglasses (even if not worn over his eyes) and a pair of logos for some Free Advertising.

There’s a Nike undershirt and a Rawlings logo on the glove. I believe there’s a second Nike logo on his wrist band but since the card is already getting Nike credit from his undershirt and you can’t really see it, I didn’t screenshot it.

I also thought it was worth noting that even though Ellis is not wearing an alternate or throwback jersey, Josh Rutledge is wearing one. 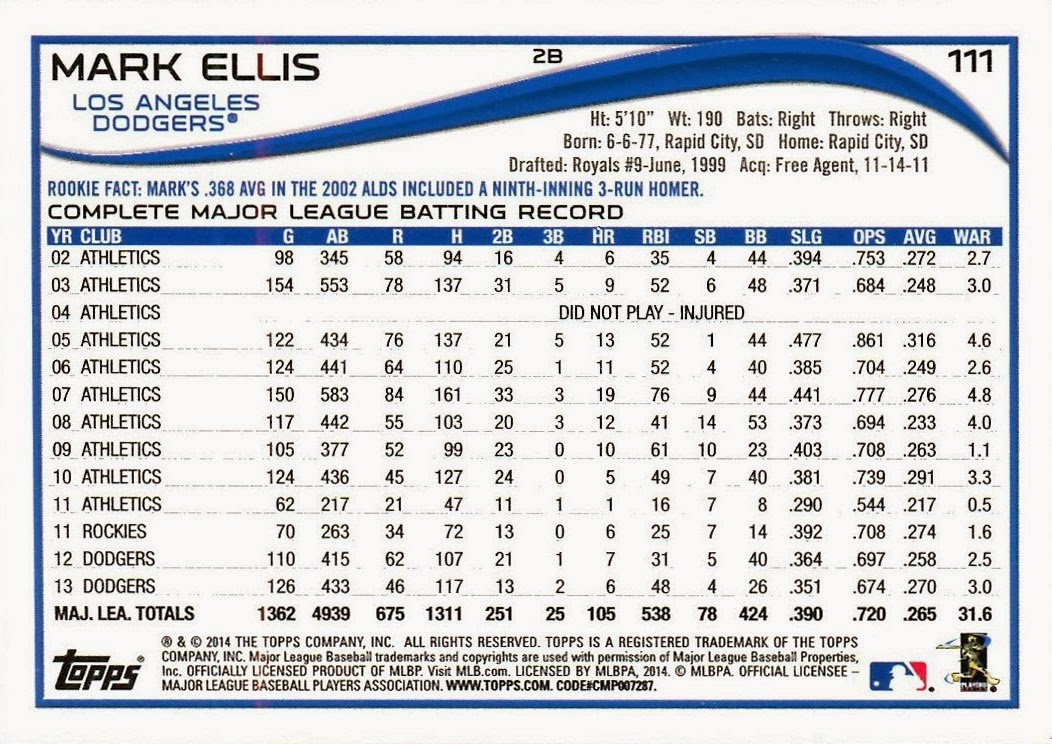 Unfortunately for the Athletics, it was a case of too little too late. In Game 5, the A’s were down 5-1 before Ellis’s homer and couldn't quite complete the comeback. They lost not only the game, but also the series.

Because of his veteran status and years of playing experience, there’s no blurb on the back of the card.

My Grade: I think I’m supposed to like this card as it hits a couple of the bigger mini collections but something about it doesn’t do it for me. I’m ok giving it an A, but again, this is not a “No Doubter” of an A+.
Posted by Once a Cub at 12:00 PM