Today’s card is connected to the last card through the Colorado Rockies organization. A sliding Josh Rutledge appeared as a cameo on Mark Ellis' card and today I have Juan Nicasio, a pitcher with the Rockies.

First impression of what’s going on: I don’t think even my love for horizontal cards can save this monstrosity. This is a worse-than-usual crop job by Topps here. Right leg in the upper left corner, cropped. Glove hand on the right side, cropped. Left leg, cropped. Even the one appendage we can fully see, Topps managed to find a photo where it looks like Nicasio’s thumb is missing! This card is very synergetic with my Once a Cub post from today, Ugh. 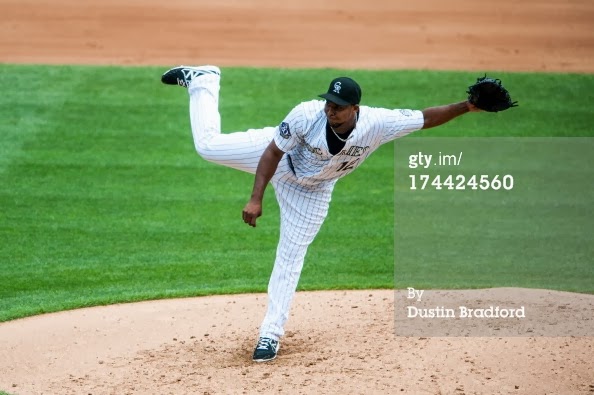 DENVER, CO - JULY 25: Juan Nicasio #12 of the Colorado Rockies pitches against the Miami Marlins during a game at Coors Field on July 25, 2013 in Denver, Colorado. The game was delayed due to rain in the middle of the seventh inning. (Photo by Dustin Bradford/Getty Images)

The Reality of the Photo: This photo by itself isn't bad at all, but on this particular baseball card, Topps chose poorly. Nicasio's delivery is so spread out, it didn't really have a chance of being cropped properly. The caption is generic so we can’t pinpoint to any particular play in the game. But let’s go to the BOXSCORE and see if they at least finished the game, since the caption says it was delayed.

Looks like some solid starting pitching before the dam broke for both bullpens. Is that literal since there was a rain delay between the shutout and scoring?

To be honest, I couldn't even tell you if Nicasio was a starting pitcher or a reliever so I’ll have to further into the breakdown to see what this means for today's subject.

I guess the good news for Nicasio is that despite the crappy card, he had a very nice day on the mound. Seven innings pitched while only giving up two hits and a walk and striking out nine seems pretty good in the Mile High City. Who knows how it would have turned out if there was no rain delay and Nicasio kept pitching. According to this RECAP, it was 93 minute delay.

Unlike during the Rutledge cameo, the Rockies weren't wearing an alternate jersey on this day. But we do get to see a decent shot of the Rockies 20th Anniversary patch that Nicasio is sporting on his sleeve. 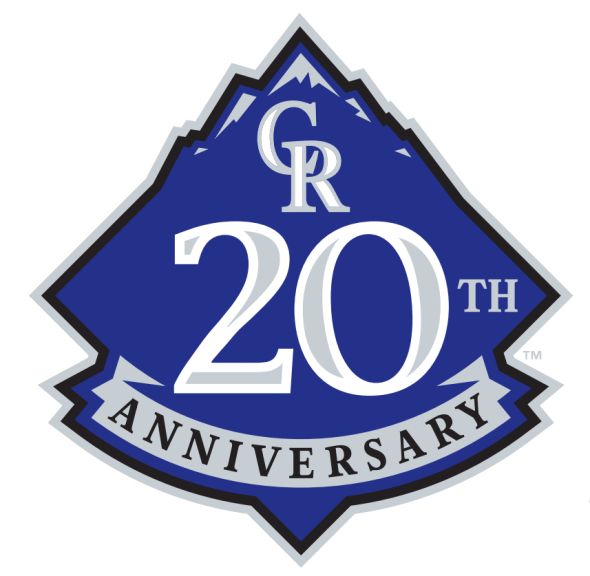 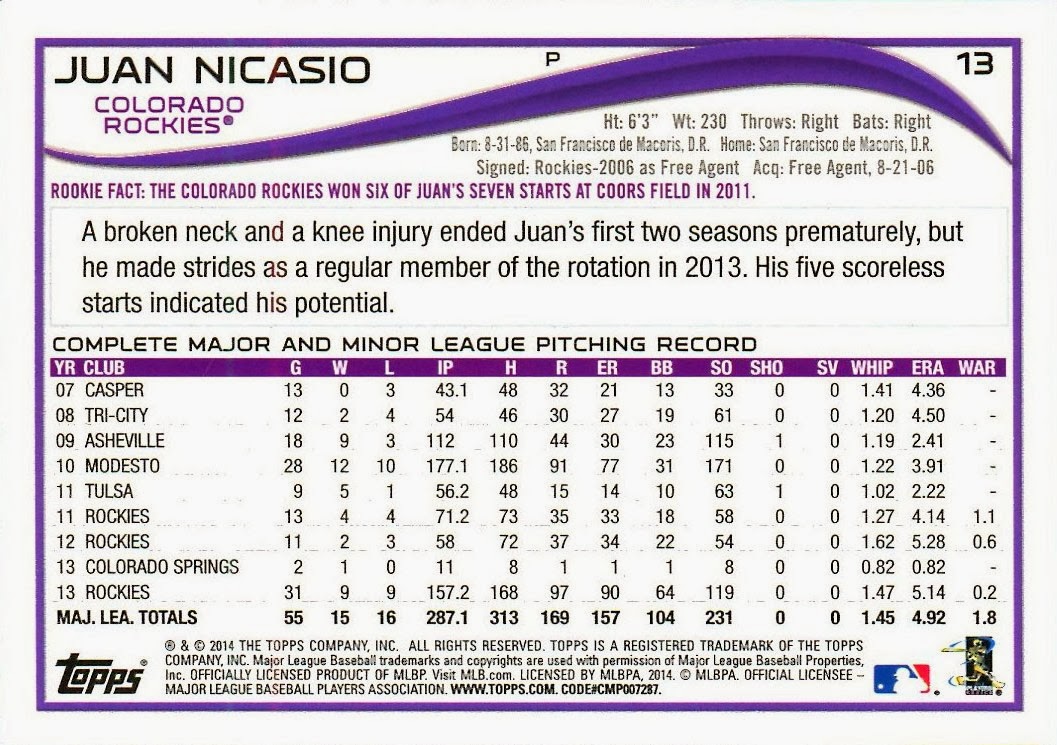 He must have gotten a little bit more run support than he did in the game pictured on the front.

Turns out that while the Rockies were 6-1 when Nicasio pitched at home, they were 1-5 when he pitched on the road. And that only home loss? That was the game that Nicasio “broke his neck” as mentioned in the blurb.

For those that don’t remember, while pitching against the Washington Nationals, Nicasio took a line drive to the head. When he fell, he fractured a vertebrae in his neck. There is video online for those curious, but I won’t be posting it here. Scary stuff.

My Grade: When I saw this card, I hated it. After the breakdown, and remembering/learning more about Nicasio’s injury, I feel a little guilty about that but it is still a horribly conceived card. The fact that it is horizontal can’t even carry it out the doldrums. Sorry, Juan, but this card gets an F.

Also apologies go out to photographer Dustin Bradford because the photo itself is pretty good. Not his fault.

As I did with the other “F” card, here are a couple of photos that would have been better. 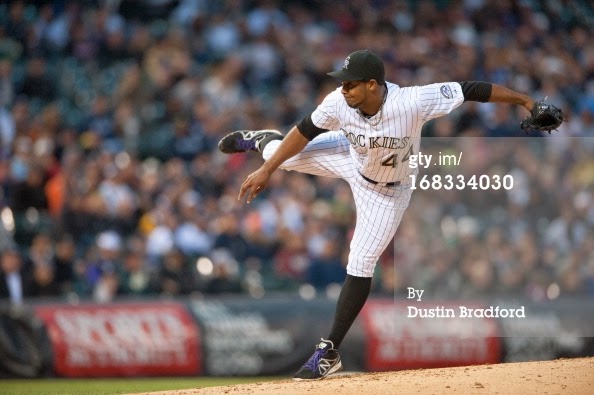 This is a slightly different angle of the one used but would have been much better as the only thing cropped would have been his left leg. Still nothing that would set it apart so I kept looking. 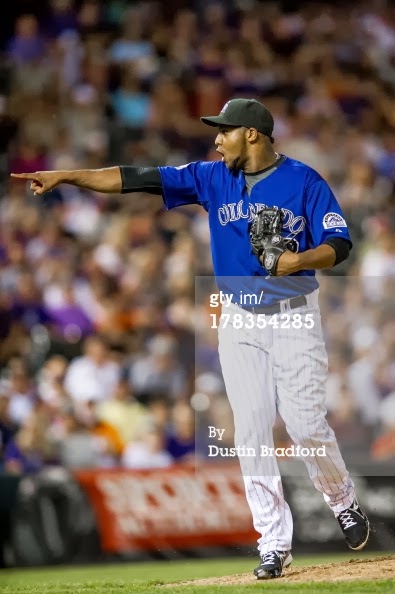 Cropped at the waist, this one would have made for a good horizontal card too. We have an alternate jersey with a celebratory motion going on. Can't go wrong with a pitcher at the plate. And laying down a bunt, too. The last three were also by the same photographer as the one that was used. 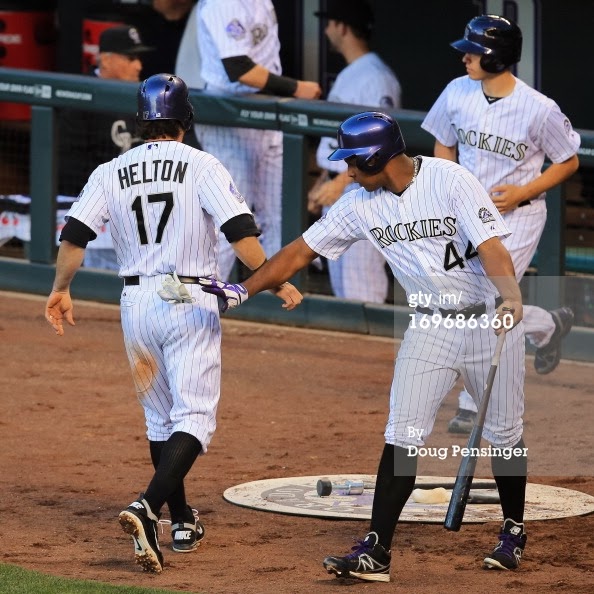 And last, we have what could be my favorite. We've got a cameo by the bat boy and the player most synonymous with the Rockies organization, Todd Helton. There's the pitcher's appreciative and congratulatory butt slap. And of course one of the rarest of locations for a card, the on deck circle. Photographer Doug Pensinger's work has already been used on other cards and the game is from May, well within Topps time frame for cards, so I see nothing that would have stopped the use of this photo.