First impression of what’s going on: It looks like Paul Goldschmidt definitely just hit a bomb, but it’s hard to tell from his reaction whether it cleared the fence or is going to end up in the outfielder's glove. It may look like a simple follow through, but I agree with whoever collects the cards with nameplates and/or the jersey number from the player’s back. This one is pretty cool looking. And not to mention, it is a heck of an accomplishment by the photographer to capture it mid-action when you have a long name like Goldschmidt. 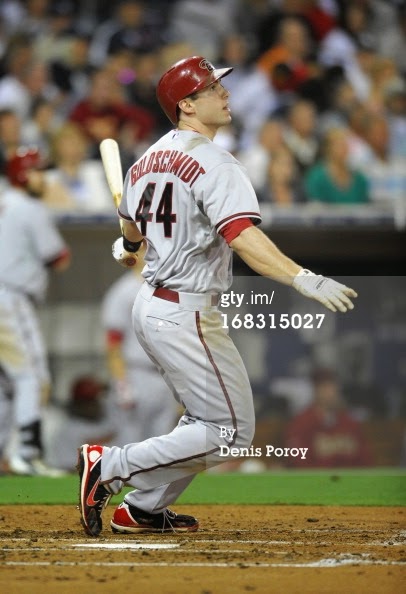 SAN DIEGO, CA - MAY 03: Paul Goldschmidt #44 of the Arizona Diamondbacks plays during a baseball game against the San Diego Padres at Petco Park on May 3, 2013 in San Diego, California. (Photo by Denis Poroy/Getty Images)

The Reality of the Photo: Hmmm, another game at Petco Park. Between the Padres and Rockies, they seem to be involved in a lot of the cards I’ve featured so far. But before you think the Padres are what link yesterday's card to today's, I had no idea the Padres were the opponent when I selected it. So stayed tuned for the connection.

You know what? I was so impressed with the nameplate thing, I didn’t even really notice the tight cropping on the photo for the card. I don’t even mind that the right arm is missing as much as I could have used a little bit more space to the left of the bat. Nitpicky, I know. Especially when I’ve already praised the photo used.

There’s no clarification as to whether this was a home run or even the outcome of the game, so let’s go to the BOXSCORE.

Looks like the Padres held off a late rally by the Diamondbacks. Let’s see if Goldschmidt tried to play the one man hero like Everth Cabrera did yesterday. 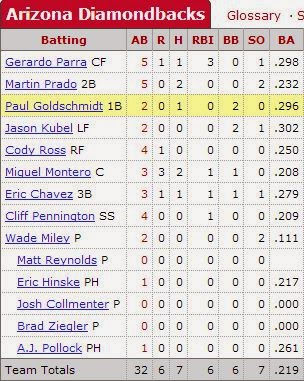 Eh. No RBI’s or runs, so this photo wasn’t of a home run like I originally thought. So it’s either his “regular” hit or his out, as its unlikely with his eye line that it’s a foul ball during one of his walks.

He walked in the first, stole second base but was stranded there.

Ouch. In third, he hit a bloop to right field that was caught and then Martin Prado was doubled off first. That doesn’t look like the eye line of a bloop. Or to right field. Hope that’s not it.

He walked again in the fifth only to get caught in an inning ending double play by the next batter.

Finally in the 8th inning, Goldschmidt singled with a line drive to center field. It is still doesn’t look like the eye line of a single, but it definitely looks like a center field shot. Guess it wasn’t definitely a bomb like I declared earlier. 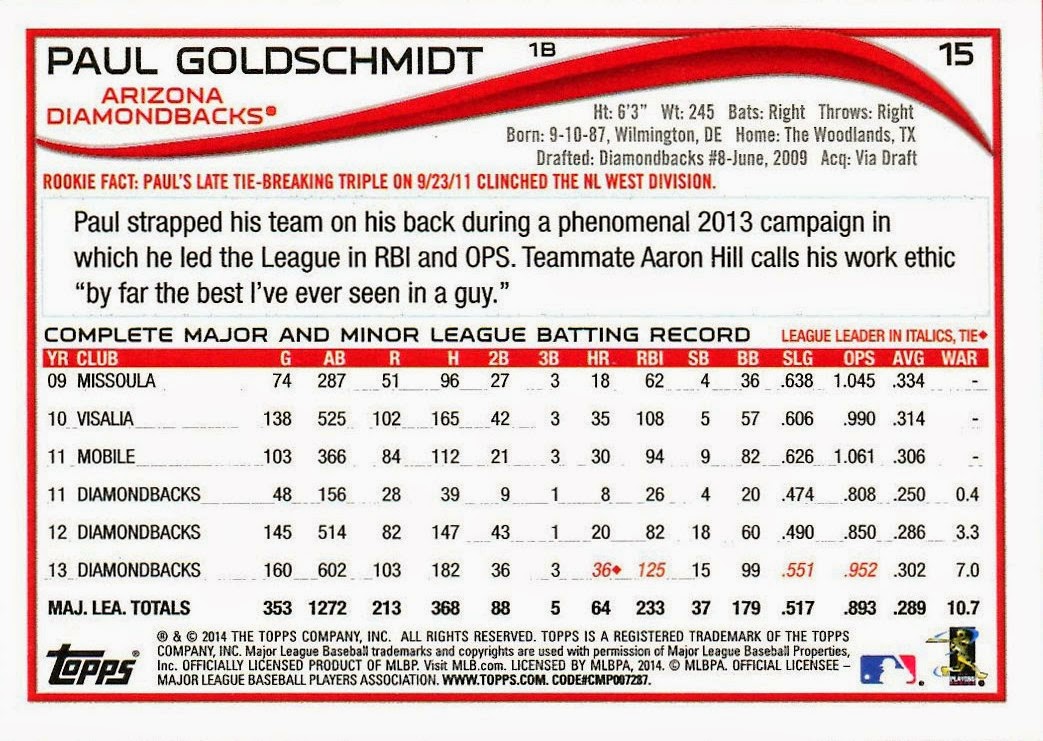 On one hand, that’s kind of cool, especially for a rookie. There was probably some champagne flowing the locker room and everybody was having a good time. On the other, here are the standings before the game: 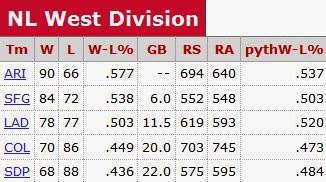 The Diamondbacks had a 6 game lead so it’s not like they clinched on the last day of the season or against the second place Giants. And the hit wasn’t a walk-off or anything. Maybe that’s just the jaded Cubs fan in me, because I would certainly celebrate any time the Cubs clinched. I mean, it's not like the Giants were the defending World Series champions and future 2012 world champs.....oh....

And Goldschmidt only played 48 games in 2011, so maybe that was the highlight of his rookie season.

As opposed to 2013. Finally we get to the connection to yesterday’s card, the red font reading League Leader in Italics, ◊.

Not only was Goldschmidt an All-Star and Silver Slugger winner for 1st Base, he led the NL in RBIs, Slugging and OPS, while tying for Home Runs. And he got exactly 0 first place MVP votes. What?!?
Sure, he ended up in second place (behind Andrew McCutchen), but not a single 1st place vote? It’s not like McCutchen was a unanimous selection. Yadier Molina got two first place votes and ended up in third place. I live in Virginia, but even I’m shouting East Coast Bias on this one. The Diamondbacks must have been worse as a team than I remembered last year.

My Grade: There aren't a lot of niches for this card but I’m still impressed by the nameplate thing. Maybe I feel a little bad for him because he missed out on some MVP voting too, because I going to give this card a B+.
Posted by Once a Cub at 12:00 PM