Staying in the National League, but going all the way back east to Philadelphia, we have rookie pitcher Ethan Martin.

First impression of what’s going on: Basic pitcher shot, but we have the dreaded appendage crop. Meh. 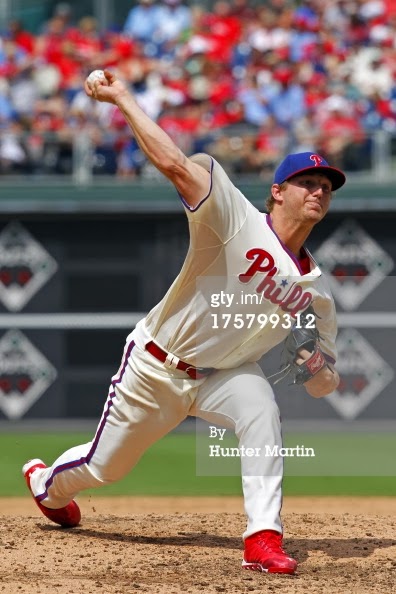 PHILADELPHIA - AUGUST 8: Starting pitcher Ethan Martin #49 of the Philadelphia Phillies throws a pitch during a game against the Chicago Cubs at Citizens Bank Park on August 8, 2013 in Philadelphia, Pennsylvania. (Photo by Hunter Martin/Getty Images)

The Reality of the Photo: Yep, nothing blocking his arm from being included. He’s not flipping the bird with a fancy “middle finger curve” or anything. Just poor cropping. You can’t tell anything from the scoreboard in the background and the caption is as generic as the photo. It does give a date and opponent so let’s check out the BOXSCORE.

Dang. They crushed the Cubs. So badly that the Phillies pinch hit for Martin in the 5th with a 10-1 lead. I’d like to think this is the pitch that Nate Schierholtz smashed for a home run to lead off the top of the fourth and accounted for the only Cubs run. In fact, please start spreading that rumor now.

Anyhow, Martin had a decent day’s work against one of the worst teams in the league. Thanks Marlins, White Sox and Astros for being worse! And the Twins for being just as bad!

You may notice that after earning this victory, his record was 1-1. Great. His first career victory was against the Cubs? I guess maybe this can be worked into a niche collection somewhere. He’s also wearing one of the Phillies’ alternate uniforms rather than the standard home red pinstripes, so the card has that going for it, which is nice.

I almost gave him credit for the "Free Advertising" with the Rawlings logo on his glove, but I didn't think the average person would instantly recognize the logo. Baseball fans? Probably. Card collectors? Probably. Guess I'm being a jerk, huh? 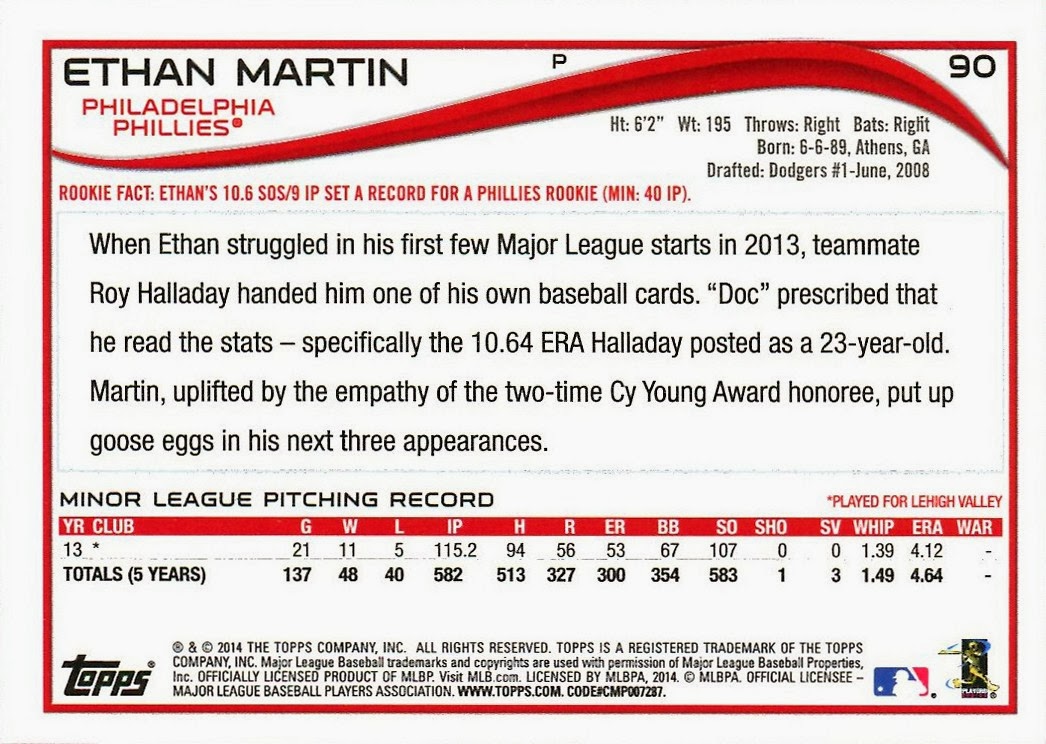 Well, the Cubs tried not to help him out on that stat as they only struck out 4 times in 5 innings against Martin. Moving to the bullpen after starting his first seven appearances probably did help though.
Since this is the first rookie card I’m taking a look at, let me just say, I wish Topps would have put Major League stats on the back. They had time to get the veterans’ stats together. Why not the rookies? I guess Martin’s Rookie Fact sounds more impressive if you just glance at his card and think he pitched 115.2 innings and still had the team record. But those are his minor league stats for 2013. He actually only pitched the minimum 40 innings, a true example of how you can make statistics say just about anything you want.

The blurb is a little silly, but amusing. After looking at Martin’s game log, the only time he threw “goose eggs” in three straight appearances was right after moving from the starting rotation to the bullpen. I don’t know enough about the Phillies to make the call, but what does that say about his chances of being on the Phillies roster this year? Who knows, maybe he'll be a failed starter turned closer a la Mariano Rivera?

My Grade: Reading back through the breakdown, I feel like I came down really hard on this card. Maybe it was the fact that Martin shutdown the Cubs, but I’m not so sure. I mean, who didn’t last year? Its not that big of a deal…

I think the bad crop job got it started on the wrong foot. And the back was disappointing. I know Topps doesn't have much to work with since a lot of these guys only have a few weeks’ worth of a season, but I expected a bit more. This card was on the verge of failing, but when all was said and done, it pulled off enough niche collections to squeak by with a C-.

I don’t know how often I’ll do this with cards that don’t make the grade, but I thought it would be interesting to see how Topps could have done better with the photo selection. A search for “Ethan Martin Phillies” pulled up 51 photos on Getty Images. Compared to more established players, that is a pittance. Many of them are from a few weeks after the photo Topps ended up using, but if you remember Michael Young’s card from earlier today, that photo was all the way from September 11, 2013.

I didn't have time to mock up a Photoshopped version of the actual card so here are some original photos.

I’ve always liked these Catcher’s Eye photos where the ball is headed straight towards the camera. This is from just two weeks after the photo that was used and two weeks before the Young card. There's even an umpire in view, although he'd probably be cropped out. And just think of the sparkle that could have been added to make this an SP… 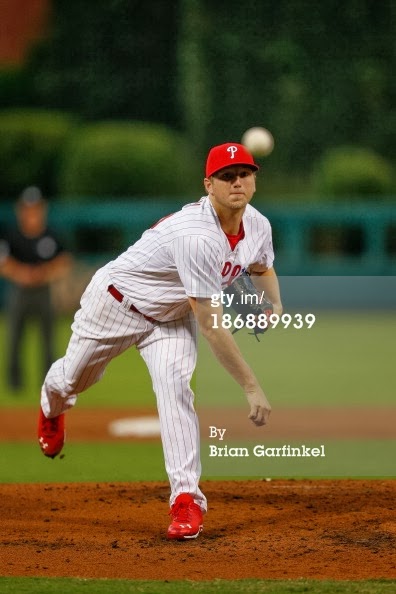 Mound meetings are generally not good. The lone exception might be a postgame handshake between the closer and catcher. When the catcher goes out like this, it generally means the pitcher needs to calm down a bit or signals are getting crossed. Probably not good for a card, but in my opinion, it’s better than a cropped arm/hand. 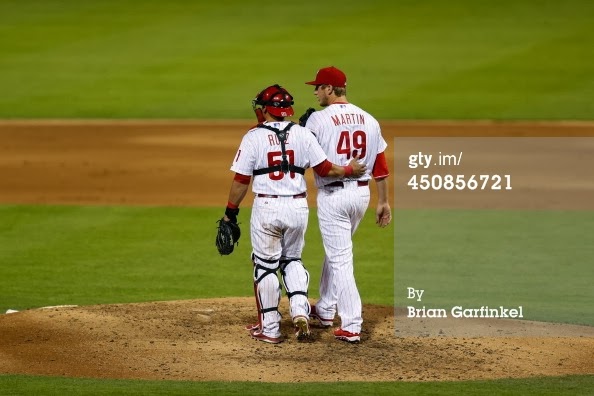 But when I saw this photo where interim (at the time) Phillies manager was relieving Martin of his duties, I smiled. Ethan “Cub Killer” Martin getting yanked by HOF Cub, Ryne Sandberg? Cardboard gold! Instant A+! 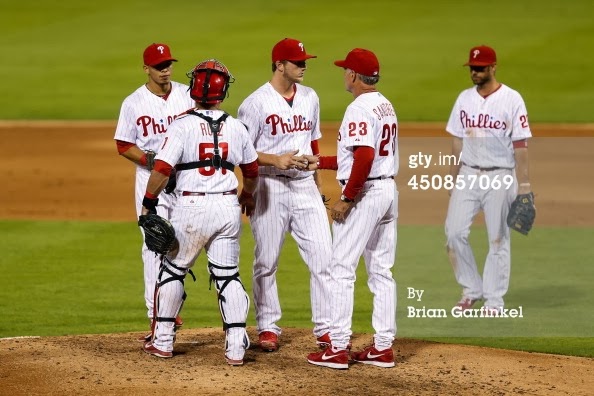 Throughout the year, Sunday will be a day off from posting for me. It'll give me time to catch up on some research and/or rest, especially when these get upped to three per day. Then I’ll come back with a new card on Monday morning. Since I’m ran a contest to drum up some followers earlier in the week, I’ll do a short post announcing the winner.
Posted by Once a Cub at 6:00 PM