Yesterday I honored the Super Bowl teams with cards from their baseball counterparts. Today, I’ve got two random members of the two World Series teams. Actually, this first one is the only Red Sox player I pulled in either the blaster or the hanger box I bought so it was randomly selected by Topps I guess.

First impression of what’s going on: I remember this image quite well as it, or one much like it, was on the cover of Sports Illustrated last April. It followed the terrible bombing at the Boston marathon. I have mixed feelings about putting this particular image on a baseball card and think its selection walks a fine line between honoring a community and capitalizing on a tragedy. 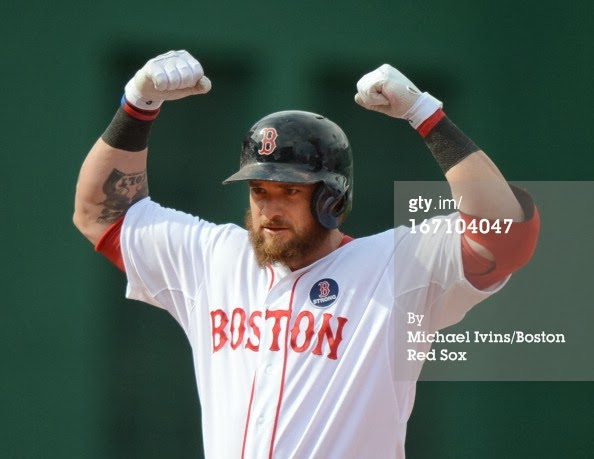 BOSTON, MA - APRIL 20: Jonny Gomes #2 of the Boston Red Sox reacts after hitting a double against the Kansas City Royals in the eighth inning on April 20, 2013 at Fenway Park in Boston, Massachusetts. (Photo by Michael Ivins/Boston Red Sox/Getty Images)

The Reality of the Photo:  Despite another mis-crop by Topps, this really is a great photo. The caption makes no mention of the importance of the play. Following the marathon bombing on April 19, 2013, the Red Sox/Royals game was cancelled. The next day, David Ortiz game the crowd an impassioned speech, even dropping the F-bomb on live TV. That's a story you won't see in the BOXSCORE.

What you will see is that down 2-1, Gomes came off the bench to lead off the bottom of the 8th with a double. This pose was the result after reaching second base. He would later score on a three run homer by Daniel Nava which secured a 4-3 win for the Red Sox and the city of Boston. 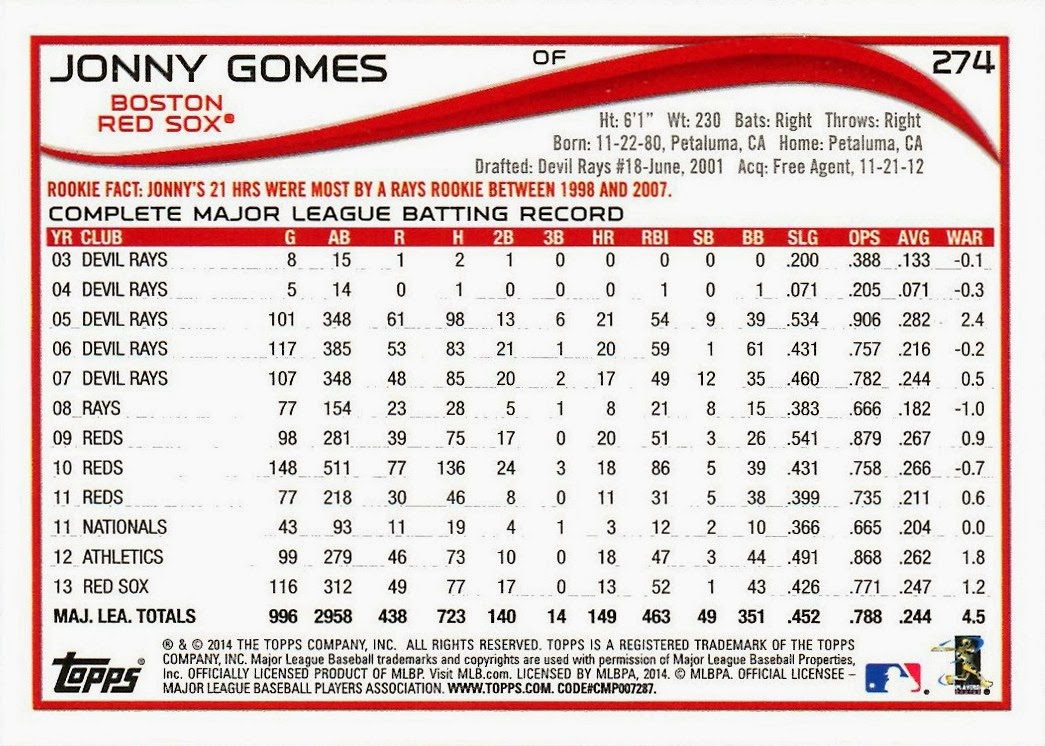 For those curious, I looked up who broke his Rays rookie record in 2008. Only two players on the Rays that year had more. Carlos Pena (not a rookie) had 31 and some guy who won the Rookie of the Year award that year, Evan Longoria had 27. And to be nitpicky, Gomes still has the Devil Rays record as 2008 was the year they became just the Rays.

Beacuase of all the stats the card has, Gomes is the first card I’ve shown without a blurb. Funny how the veterans with a career’s worth of stories are the one left without them.

My Grade: I hope this card doesn’t end up lost in dime boxes somewhere and the significance lost.

A horizontal layout is one of my top niches. Awesome hair isn’t just limited to long flowing manes, facial hair counts too. I myself am not a tattoo guy, but I've noticed a lot more popping up on players and cards. The Boston Strong patch is the first one I've seen this year, although when I get to the Cardinals cards, I'm betting I'll see a Stan Musial commemorative patch.

If Topps hadn't zoomed in so close and kept his fists in the frame, this would have been my second A card. But I won’t let my disdain for bad cropping drop this otherwise pretty awesome card a full letter grade. A- it is.

UPDATE: Since I wrote this, I've decided to change my grade to an A. If it was cropped better, I would have given it an A+, not just an A, thus the change.
Posted by Once a Cub at 9:00 AM