First impression of what’s going on: As usual, the crop is too tight.  Keppinger is missing part of a hand and the baseball is missing a chunk. Otherwise, it’s a decent shot of a play at first. I like the photos where the ball is about to be caught or hit. And on a blown up version of the photo, I bet I could count the stitches on the ball, no blur at all in the photo.

Wait. Did I say play at first? The card says he’s a third baseman but he’s definitely wearing a first baseman’s mitt. This isn't something I’m tracking, maybe I should, but I’m wondering how many utility guys make Series 1. 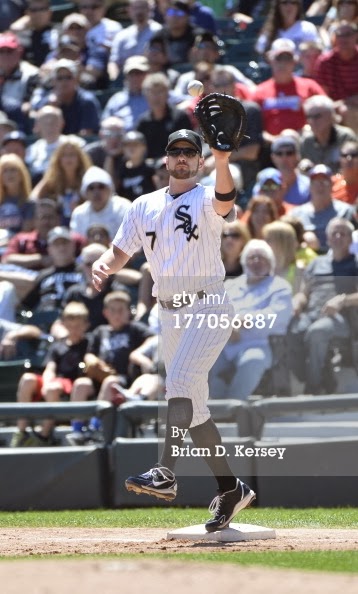 The Reality of the Photo: Yep, definitely cropped too tight. I’m not saying the card could have fit the full length photo, but I know Jeff from 2x3 Heroes probably would have liked him some high socks on a White Sox card. The caption doesn’t give much information on the exact play, and in any given game, a putout at first could be the most common play. Let’s go to the BOXSCORE.

It shouldn’t be a surprise that the division leading Tigers beat the division cellar dwelling White Sox in a later season game. But let’s look for putouts at first base.

Right off the bat, to start the game, Austin Jackson grounded out to the shortstop. Based on Keppinger’s eye line, I would probably say this is a definite possibility.

Top of the second brings two more putouts. The first seems like a tougher play that would be closer at the bag. The eye line could work but I would expect to see the runner at least starting to enter the frame. The other play came from second base and unless it was a slow roller into the grass, I don’t think the angle works. And again, a play in the grass would probably be a closer play at first.

The top of the third ends with a ground ball to shortstop. Ok, I’m done trying to figure it out. Too many opportunities and it’s only the third inning. For the record, I looked it up, and Jeff had 12 putouts in this game. I guess I could look at the shadows and find the exact time of day and correspond...zzzzzzzz.

Anyway, there's not much in the way of niches on the front of this card, just sunglasses, so let’s see what we can get from the back: 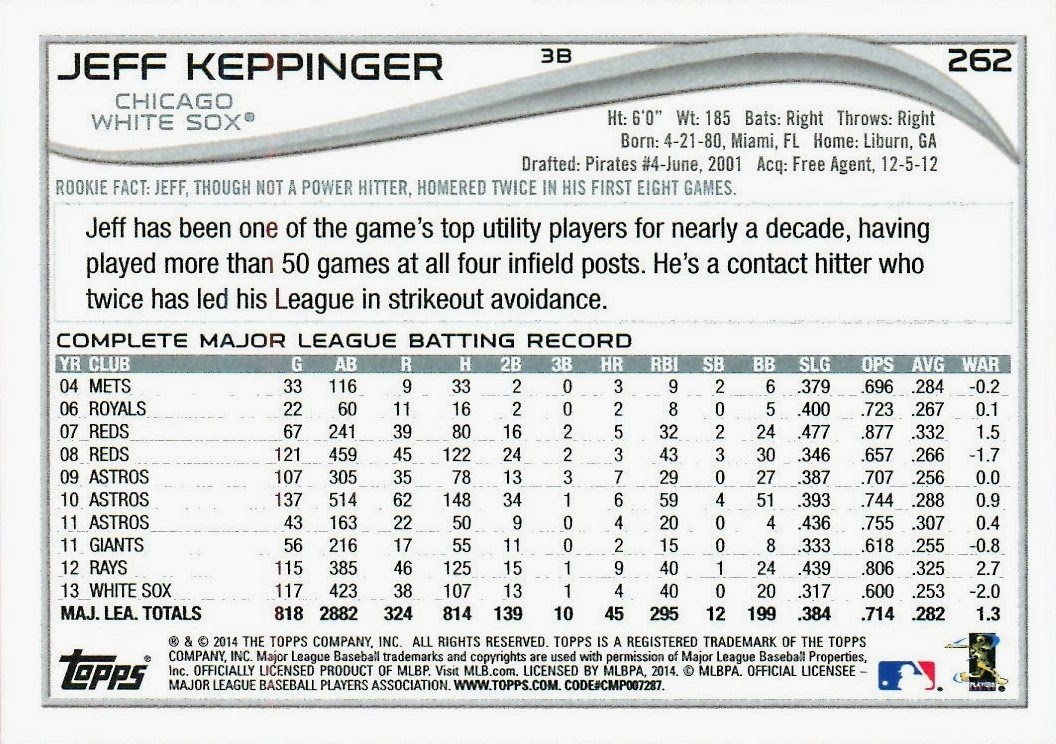 Rookie Fact: Jeff, though not a power hitter, homered twice in his first 8 games.

I went back to 2004 for some boxscores to look up his home runs and came up with game 7 of his career and game 8, both against the Dodgers. Keppinger’s Mets lost both games, and interestingly enough, they also lost the game where he hit his only other home run that season. How many before that’s a jinx?

The blurb mentions the utility of Keppinger and it shows up in the stats. Seven teams in nine seasons and nearly 200 games at three different positions is pretty much the definition of utility.
.
Information I’ll be tracking:

My Grade:  While there is nothing that makes me say, “WOW!” about this card, I still kind of like it. Maybe it’s because he’s playing a different position than what he is credited with. Or the calmness in his reaction to the play.  Or my soft spot for utility guys.

I can’t quite pinpoint why I think this is a slightly better than average card, but I’m going to give it a B-.
Posted by Once a Cub at 9:00 AM