First impression of what’s going on: I like me a good running photo. Going from first to third or trying to score from second on a single to the outfield. Hair and jersey flapping in the breeze. Wil Myers looks ready to karate chop you out of his way with one hand or knock your lights out with the other. By my count, six of the eleven Topps All-Star Rookies are included in Topps Series 1, but Myers is the first one I've shown. 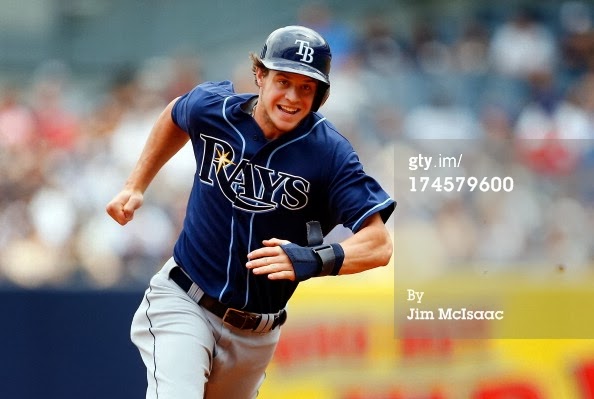 NEW YORK, NY - JULY 27: Wil Myers #9 of the Tampa Bay Rays in action against the New York Yankees at Yankee Stadium on July 27, 2013 in the Bronx borough of New York City. The Rays defeated the Yankees 1-0. (Photo by Jim McIsaac/Getty Images)

The Reality of the Photo: The angle of Myers running seems a little more pronounced zoomed out. The caption just lists him “in action” so let’s go to the BOXSCORE to see if we can figure out what’s going on.

Oooh, close game. Did Myers score the lone run? Or maybe drive it in?

Nope and nope. Let’s see what he did with his hit.

Hmmmm. A leadoff double by Myers in the 4th, followed by a walk and then three strikeouts. I would have sworn Myers was coming to third in this photo but he was stranded at second. Getting the angle of Myers coming in that hard on a double would put the photographer out in the left field bleachers. Possible, but not likely. If I knew more about Yankee Stadium, I could probably tell you exactly where that yellow sign is in the background and know better.

I got ahead of myself. I found his hit in the fourth but going back to the first inning, with a runner already on, Myers grounded to the third baseman who went for the lead runner. Myers was safe at first though. And that was followed by a single to center field by James Loney, moving Myers from first to third on the play. Much more likely scenario to match the photo.

The lone run came in the 6th but had nothing to do with Myers, as he led off the inning with a ground ball out. 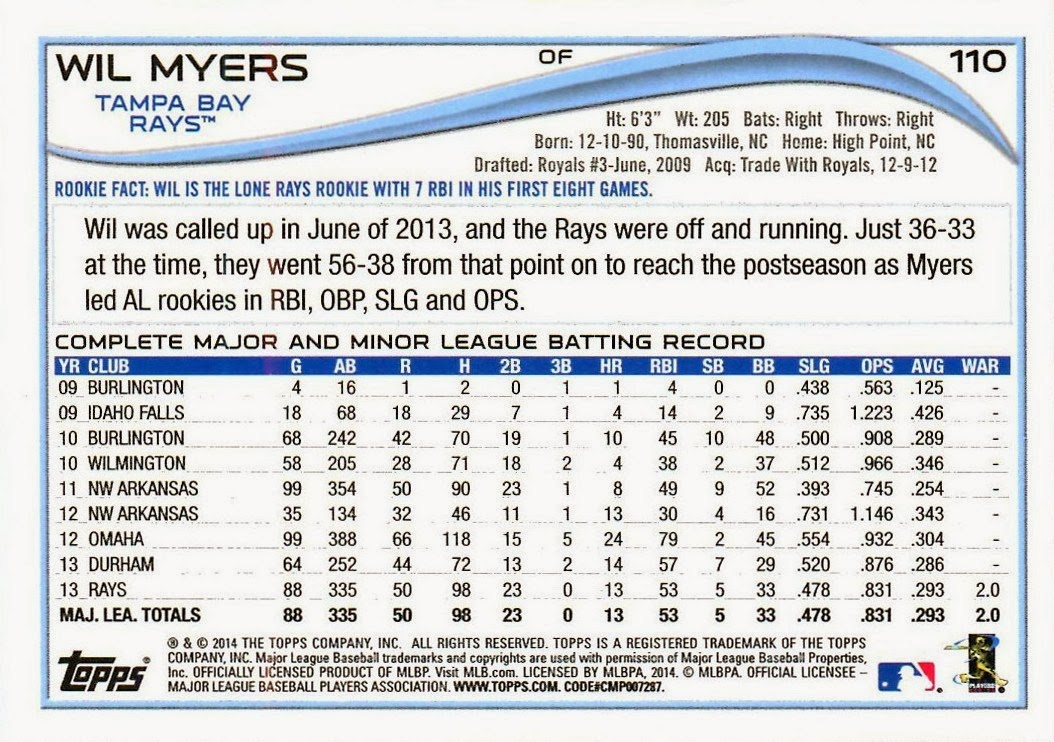 Rookie Fact: Wil is the lone Rays rookie with 7 RBI in his first eight games.

I’ll be honest, I’m feeling a little too lazy to fact check this. But the Rays are just starting their 17th season (wow, that makes me feel old!) so it seems feasible for Myers to have that record already.

I don’t know what the deadline is for these cards, but there is no mention of Myers winning the 2013 AL Rookie of the Year award on November 11, 2013. Myers was the third Rays player in the last six seasons to win the award and teammate Chris Archer (former Cubs prospect) took third place.Previous Rays winners include Evan Longoria in 2008 and Jeremy Hellickson in 2011. It was a Florida sweep as Miami Marlins pitcher, Jose Fernandez took home the NL ROY honors. 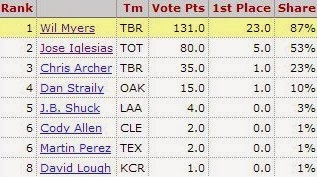 I would have to do more research on it, but 88 games seems low for a non-pitcher Rookie of the Year winner. I know a lot of rookies are mid or late season call ups, but I would think a player who made the team out of spring training or hit at least 100 games would have a leg up on those guys. But he seems to have gotten overwhelming support.

Eh, what do I know? Myers winning the ROY was fairly recent, but if you ask me again in 6 months, I probably wouldn't be able to tell you! Again, no offense to Myers. It's just that 90% of the time if I'm watching AL baseball, its because one of their teams is playing the Cubs. The other ten percent is postseason.

My Grade:  I like the photo choice, but not the cropping. The Topps All-Star Rookie designation carries a lot of weight but there's just not a lot about this card that wows me. B-
Posted by Once a Cub at 6:00 PM