And so it begins…

Rather than show favorites and start off with a Cub, I decided to put the 50 or so cards I already have on hand into the randomizer.

In case you didn't read the title, the randomizer has selected….
First impression of what’s going on: Murphy hit at least a home run, knocking in at least one of his teammates pictured. The other could be another potential base runner in a three run blast, or maybe just the on deck guy. But it probably wasn't a walk-off since the catcher is standing dejected in the background and not heading towards the dugout.

Here’s the original source photo pulled from gettyimages.com along with the caption they gave:

ARLINGTON, TX - MAY 19: Leonys Martin #2 and Elvis Andrus #1 celebrates David Murphy's #7 of the Texas Rangers three-run home run in the seventh inning against the Detroit Tigers at Rangers Ballpark in Arlington on May 19, 2013 in Arlington, Texas. (Photo by Rick Yeatts/Getty Images)

The Reality of the Photo: So this one wasn't too hard to call. I wasn't sure about the size of his home run but the caption confirmed it was a three-run shot and that it was from the 7th inning and not a walkoff.

Taking the date from the caption I headed over to Baseball-Reference.com for the BOXSCORE and further details.

Wait a minute. The Rangers only scored two runs in the seventh inning. How do you hit a three run homer but only get two runs? The answer is: you don’t. The home run was actually hit in the 6th inning. Here’s a screenshot of the inning recap:

I don’t know how often this will happen, but Getty Mistakes might be something I have to track too! Murphy did bat again in the 7th, but it was merely an RBI sacrifice fly, not something celebrated so jubilantly.

Murphy’s home run turned a 7-5 deficit into an 8-5 lead, marking the fifth and final lead change of the game.

David’s line for the day:

Earlier this week, I teased that I was compiling a list of mini collections that these cards could possibly fit into. Some of them are niches I've read about on the blogs (bunting, night cards, throwback unis, etc.) but others I came up with after looking at cards in my own collection (eye black, headfirst slides, umpires, etc.). This card puts a lot of tick marks on the checklist, including one that I came up with for just this card (although I have a feeling it’ll be used more often): Notable Fans

And I by notable, I don't mean famous. More like the fan could be credited in the cameo section. Usually they'll show up on cards when a player is signing an autograph or diving into the stands. How many of you noticed the little red headed fan amidst all the celebrating? She certainly jumped out out at me. 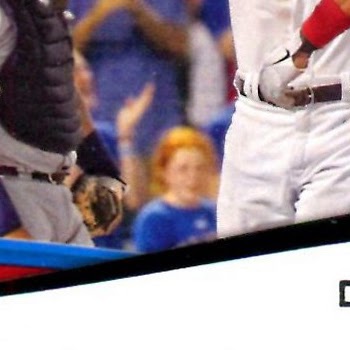 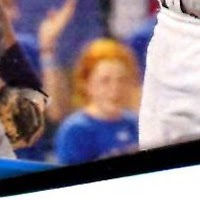 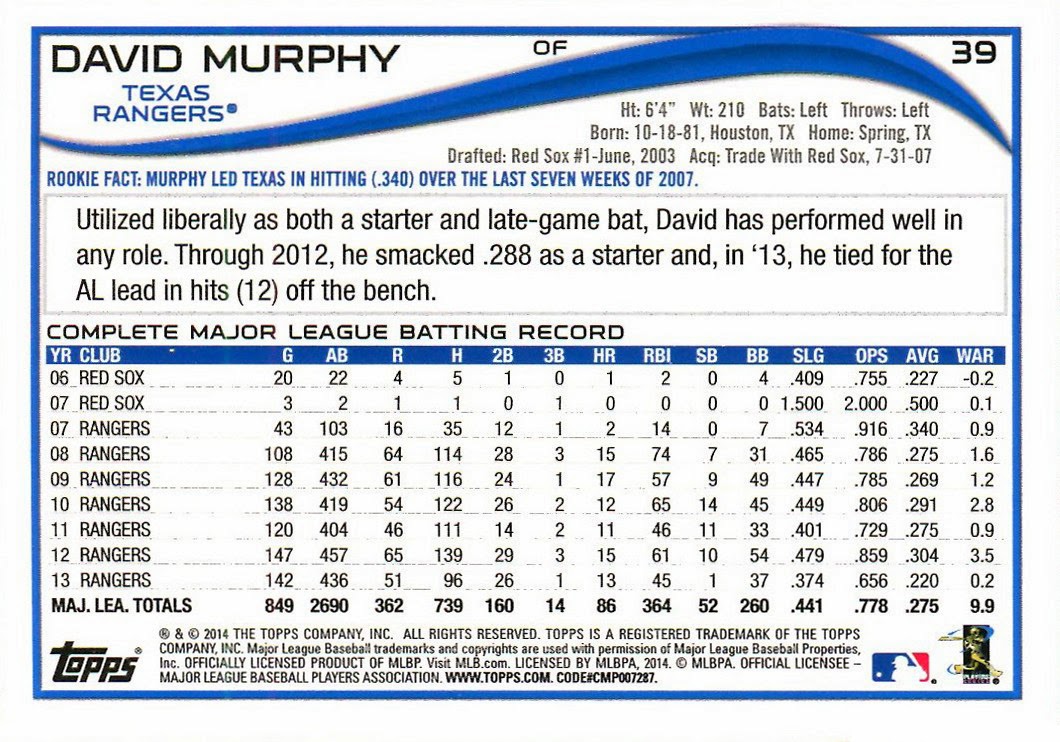 Since the backs are relatively the same, I’ll just be breaking down the content.

I mentioned yesterday that I really liked the Rookie Fact on the back of the cards and that they really seemed more personalized to each player than the generic milestones from last year. That said, my initial reaction to Murphy’s fact was that it was oddly specific.

But after looking at his statistics, he still qualified as a rookie in 2007 even though he played a bit in 2006. And the “last seven weeks of the season” was the time he actually played with Texas after starting the season with the Red Sox organization. I guess that wasn't so odd.

My Grade: I’m going to give this card an A. The photo had a lot going on, giving me a lengthy post to get this blog rolling. Good job, randomizer! Another takeaway is that having seen other cards from the set but without having looked at the 2014 Topps Opening Day checklist, makes me wonder if they are doing away with the celebration themed inserts they've had in years past.

Whew! One down, only about a thousand more to go! I hope you enjoyed the review, as this is what you'll have to look forward to for the next year. Come back at or after 6 PM EST for the next one.

Didn’t enjoy it? Please, please, please tell me what else you’d like to see/know!
Posted by Once a Cub at 9:00 AM