I know my posting schedule here has been a little out of whack but I’m trying to find my groove again. I’m back today with another Mascot from 2014 Topps Opening Day.


First impression of what’s going on: Unlike the Orioles Mascot, the Colorado Rockies mascot gets a name on the card, Dinger. There isn’t much “mascotting” going on here as Dinger looks more like a deer caught in the headlights. I have no idea if Dinger is male or female so I’ll say “it” until my research tells me otherwise.


Dinger is a purple triceratops with some multi-colored freckles(?) on it’s head. No pants, just a too short jersey. 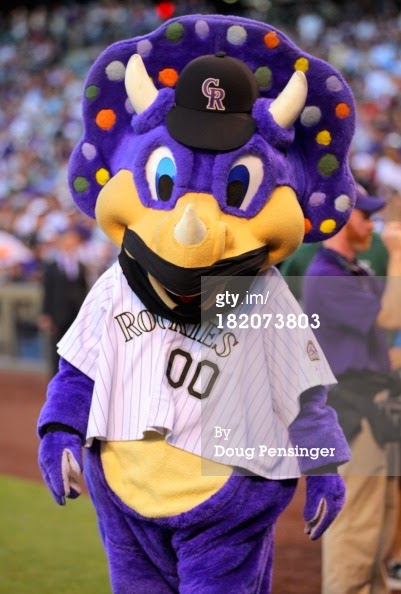 
The Reality of the Photo: The caption didn’t help much for Dinger’s gender because anybody can sport a fake beard to honor longtime Rockie, Todd Helton. I noticed the black around the mouth but I had no idea what it was supposed to be. Let’s take a look at the BOXSCORE and see if Dinger did its job of cheering the Rockies to victory. 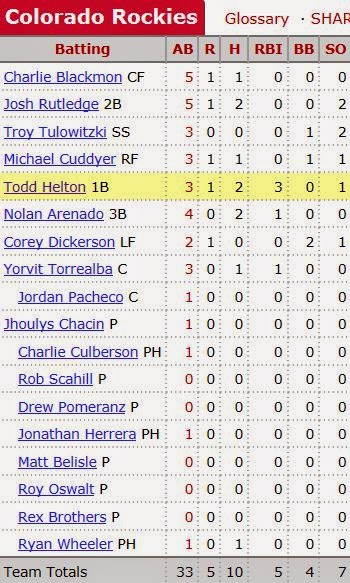 Yes! In his Coors Field swan song, Helton went 2-3 with a double, home run and a sacrifice fly. 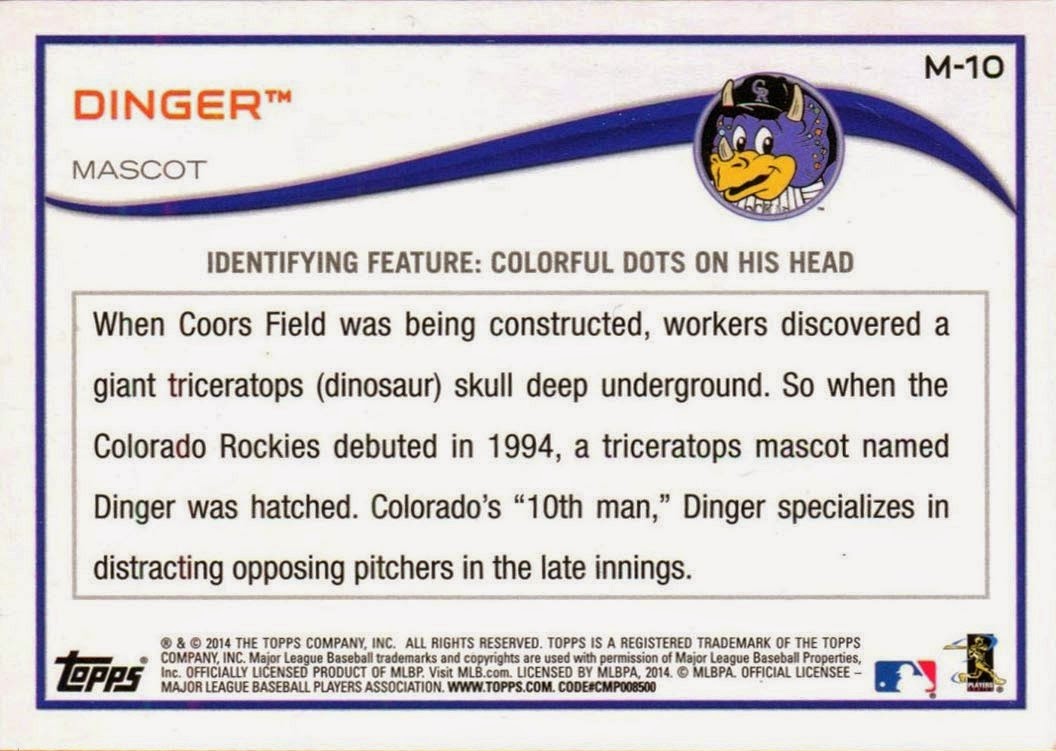 
Nice! I identified his identifying feature in my first impressions. Score! And in case you missed it, his head. Dinger is male!
The write up on the back provides Dinger’s origin story. Apparently, during contruction for the stadium, the construction crew found dinosaur bones. Maybe it did, but I’m surprised this didn’t cause some kind of delay or even relocation of the facilities.


I couldn’t find much information on Dinger through the Rockies website (just his rates for private appearances) and it appears he doesn’t even have his own Wikipedia page. There does appear to be a lot of anti-Dinger propaganda out there though. It’s a hard knock life for a mascot.


My Grade: I mentioned at the beginning that Dinger didn’t seem to be doing any “mascotting” in this photo and that, to me is kind of a detractor for a mascot card. He should be hooting and hollering and pumping up the crowd. I know there are some mixed feelings on mascots and their place in the game, but I think they’re fun.
To be fair to Topps, there wasn’t much of a selection to choose from though.