First impression of what’s going on: Well, this card has failure written all over it! Starting with Kolten Wong being a Cardinal and then having him trying for a double play against the Cubs? Blasphemy! All kidding aside though, this is a pretty sharp looking card. Nicely framed. 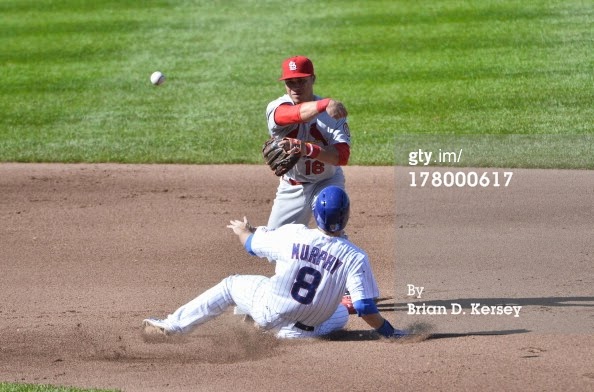 CHICAGO, IL - AUGUST 16: Second baseman Kolten Wong #16 of the St. Louis Cardinals throws to first base to complete a double play as Donnie Murphy #8 of the Chicago Cubs slides into second base at Wrigley Field on August 16, 2013 in Chicago, Illinois. The Cubs defeated the Cardinals 7-0. (Photo by Brian D. Kersey/Getty Images)

The Reality of the Photo: Wow, look at all that open space. And for once, Topps didn’t over crop. The caption says that Wong is throwing to first base to “complete” a double play but it also says the Cubs won 7-0 so how much do I believe that?  I’m going to have to verify that by taking a look at the BOXSCORE.

The caption was right that the Cubs did indeed win 7-0 so I guess Murphy’s attempt to break up the double play doesn't matter in the grand scheme of things though with that score.

The Cubs grounded into three double plays that day, but only one involved Murphy.

The culprit behind it in this case was shortstop Starlin Castro.

This must have been sweet revenge for Wong as he himself killed a rally by grounding into a double play in the top of the second inning.

I don’t think the Rawlings logo on Wong’s glove is visible enough to count it as Free Advertising. And I don’t remember if I counted any previous MLB logos but there is a clear one between Murphy nameplate on the back of his jersey and his helmet. I guess between the two, I can give him a little credit.

Wong is also sporting the Stan Musial Commemorative patch that I briefly mentioned on Matt Carpenters’s post a few weeks back but didn't really go into. 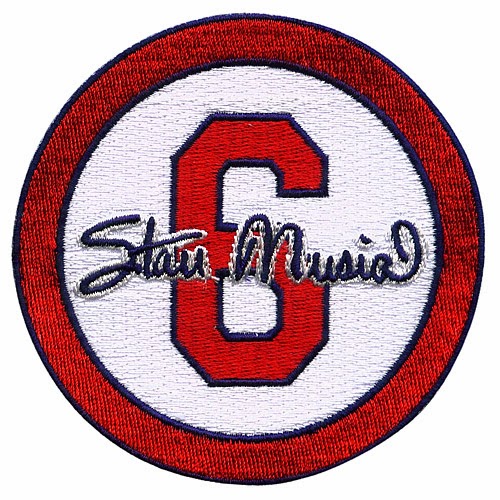 Hall of Famer Stan Musial passed away in January 2013 and the Cardinals wore the patch all season. 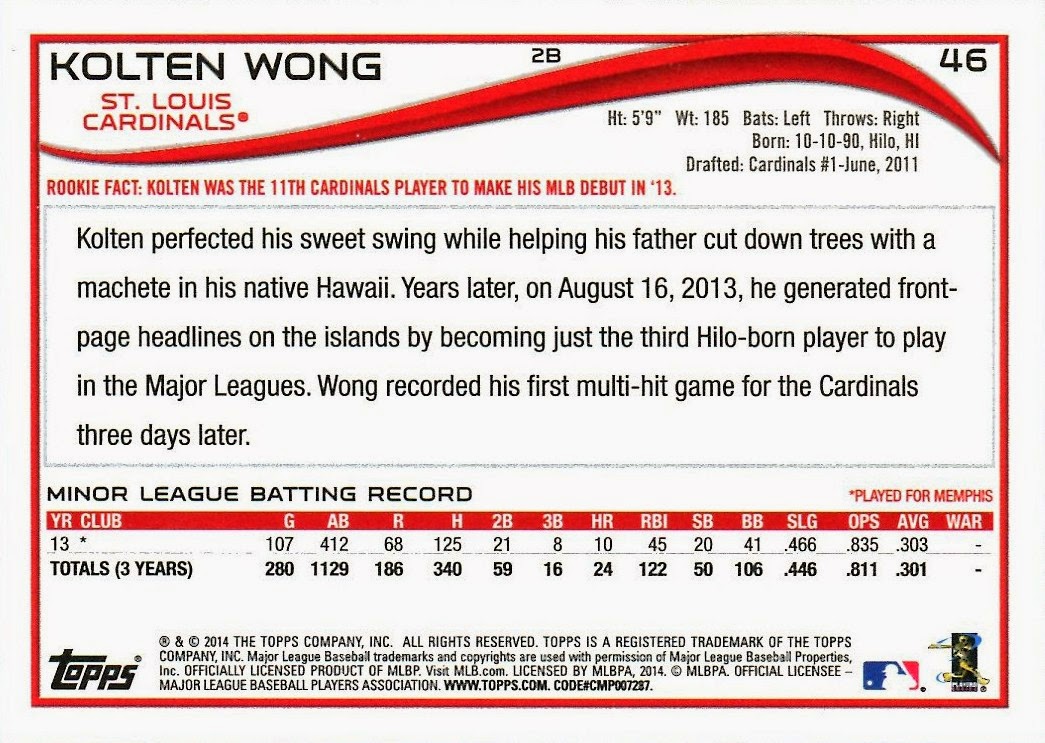 Rookie Fact: Kolten was the 11th Cardinals player to make his MLB debut in ’13.

That’s kind of crazy. He wasn’t even the last, as they had one more debut in September. 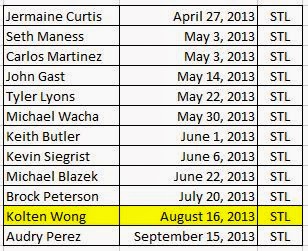 By comparison, the Cubs, who used a team record 56 players in 2013, only had 6 make their MLB debut. Houston led the Majors with 15 MLB debuts while Colorado, Kansas City and Toronto all had the least with 3. Here’s a link to all 230 players who made their dreams come true last year.

The other two Hilo players mentioned but not named in the blurb are former Dodgers pitcher, Onan Masaoka (1999-2000) and former Tigers, Rangers, Padres and Diamondbacks pitcher Brandon Villafuerte (2000-2004).

My Grade: As I mentioned, this is a pretty well laid out card. The crop is good. The action is solid, if not unfavorable to the Cubs. And despite being shown in a poor light here, the Cubs came out victors in the game from which this photo originated. Not every rookie has a decent photo for a card so Wong lucked out here.