First impression of what’s going on: Here’s a guy I have never heard of outside of baseball cards. Granted I’m not a big American League guy but I've seen a few White Sox games on WGN when the Cubs aren't on. Phegley’s rookie card is in last year’s Update series.

On this card, he could be launching a bomb or merely flying out, but either way, his eye line looks like it’s headed towards the outfield. 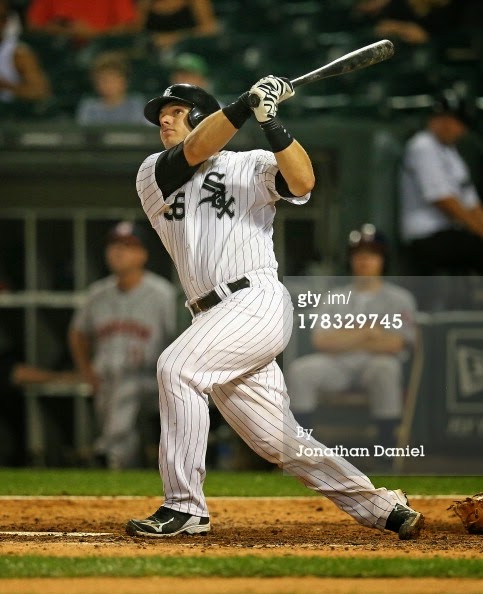 The Reality of the Photo: Cropping bats is ok with me, but it’s a little tight at Phegley’s elbow. The caption didn't give much detail about the at bat but let’s see if we can narrow it down with a little help from the BOXSCORE.

We knew the White Sox lost from the caption, but maybe Phegley had a good game? 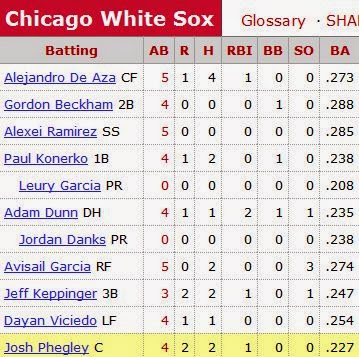 Pretty good actually. Two hits, two runs, an RBI. Let’s see if we can pin down the photo.

A single to center in the third. That’s a possibility. And he came around to score. What else?

A groundout to shortstop in the fifth. Probably not.

An RBI single to center in the 5-run sixth that led to Phegley scoring another run too.

And finally a flyball to left field. If this was left center, I’d call it a maybe, but his eye line doesn’t say “left field line” to me. So the photo probably comes from one of those two singles from earlier.

Phegley was also involved in what seems to be an interesting double play in that game too, although its hard to tell from just a boxscore interpretation.

It looks like a squeeze play gone wrong for the Astros. With a runner at third and one out, Phegley fields the ball (bunt attempt?), throws to first for the second out. The first baseman, Paul Konerko, then fires home to the pitcher, Andre Rienzo for the third out for the uncommon, 2-3-1 double play.

After a little search, I found the play on MLB.com. I can't figure out how to embed it but here's the link:

So it wasn't a sacrifice attempt, just a weak hit.

Unfortunately for Phegley, there isn’t much to latch onto with this card. No real niches. There’s a partial Astros cameo in the background, but the photo is too blurry to make out who the player is. 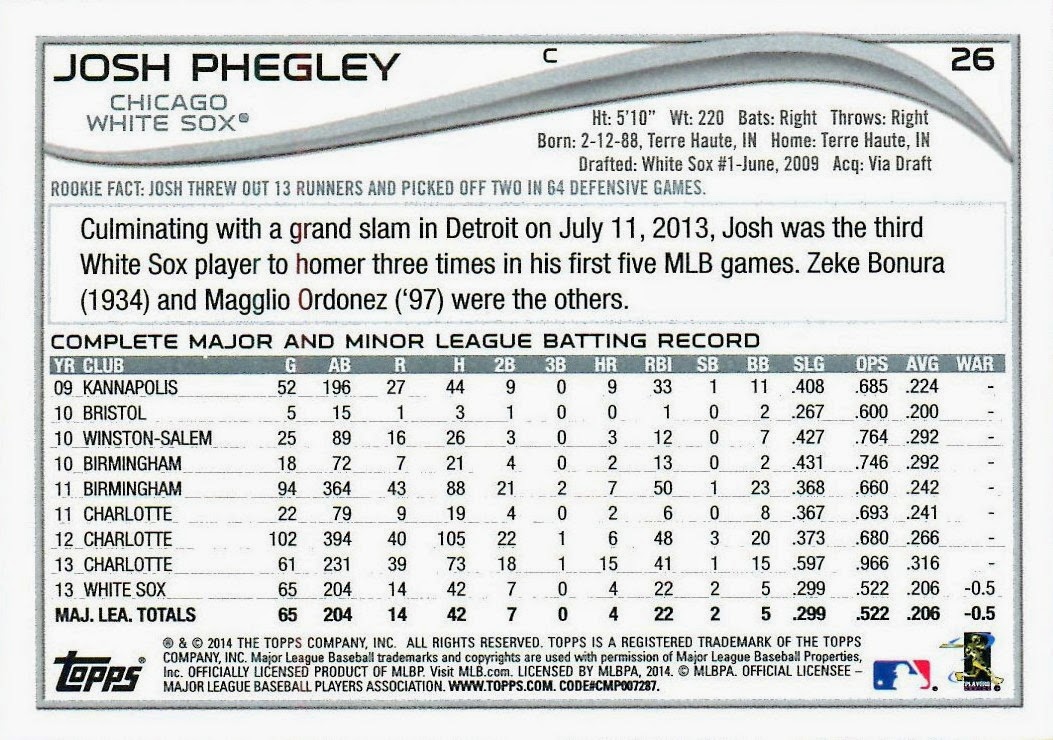 Rookie Fact: Josh threw out 13 runners and picked off two in 64 defensive games.

I couldn’t figure out if Topps was underselling Phegley behind the plate or overselling him so I decided to do a little research myself. How many innings was he behind the plate in these defensive games? Was he a pinch hitter who stayed in for one defensive inning with no runners? Did the White Sox pitchers give up tons of singles and walks last year?

I was actually a little surprised by these numbers. Of his 64 defensive appearances, 47 of them were complete games. That seems like a lot for a backup, but what do I know?

Phegley’s 13 thrown out base runners was good for 30% of the attempts. That seems like a pretty high, or at least decent, percentage to me. Nearly one in three. But again, I’m no expert on the catcher position, so what do I know.

This blurb actually gave a fact and followed up with the others who have done it so I didn’t have to do the research myself. Yay!

Card Number: #26
Player Name: Josh Phegley
Team: Chicago White Sox
Position: Catcher
Game Date: August 26, 2013
Opponent: Houston Astros
Stadium: US Cellular Field
Division: American League Central
Home/Away: Home
Outcome of the game: 10-8, Astros over the White Sox, Loss for the player depicted
Alternate/Throwback Jersey: No.
Bats/Throws: Right/Right
Birthdate: 2/12/1988
Birthplace: Indiana
Cameos by: Unknown (Astros)
Photographer: Jonathan Daniel
Niche collections this card could fit into: Former 1st Round Draft Pick,
My Grade: This card isn’t bad. There isn’t much wrong with it at all, just some slight mis-cropping. But there isn’t much great about it either. It is the definition of average. Other than him being a younger player and no options, I don’t know why card manufacturers wouldn’t always showcase a catcher in their gear and/or a play at the plate. And I’m not even a catcher guy.

This card gets a C.

Although not a failing grade, here are some photos from earlier in the season than this one that could have been used to improve it.

Whoops, too many more and Topps might start to feel bad.
Posted by Once a Cub at 7:00 PM