While I wanted to raise awareness about the Jose Veras card, I never intended to take this long of a break from the blog. I think I made my point although now it’s up to Topps if they want to fix it. Moving forward, since it’s Monday, I’m going to throw another mascot out at you.

First impression of what’s going on: I knew the San Diego Chicken wasn't the San Diego Padres mascot. And I knew the Padres had a monk/friar swinging a bat in their logo. And I've seen the “live” mascot before. But I don’t think I ever knew he went by the Swinging Friar moniker. The photo itself is pretty good, as is the crop job. The guy in the background is probably a mascot escort or chaperon or event staff or whatever it is they call them at Petco Park.

But wait. Are they in Petco Park? I think I see the top of another mascot right behind the Friar. It’s a little tough to tell, and if I hadn't just seen a card of his as well I wouldn't know it, but I think that is TC, the Minnesota Twins mascot behind him. Usually the Mascots don't travel to road games. Maybe the source photo will give me more info. 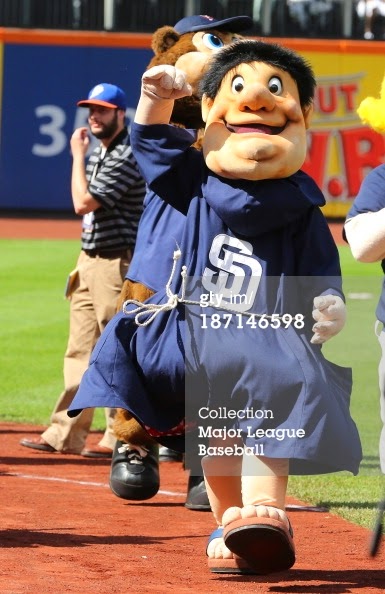 The Reality of the Photo: My suspicions are correct, at least as far as Petco Park goes. The photo was taken at Citi Field (home of the New York Mets) during the All-Star Futures Game. A quick search on Getty Images for “mascot padres 2013’ netted more results for Mr. Met than our Swinging Friar. There seems to be a pre-game (hopefully, based on the empty stands) photoshoot for Mr. Met during a Mets/Padres series.

For those unfamiliar with the All-Star Futures game, it pits minor league prospects from the USA against minor league prospects from all of the other countries. It is played during the All-Star weekend. Check out the Wiki for more information. Team USA leads the overall series 9-6 since its inception in 1999, including the last four in a row. No word on who the Swinging Friar was rooting for.

There’s no conclusive proof of the trailing mascot being TC, but I think in the source photo, I can make out the Twins logo on his hat. Bernie Brewer’s mustache/hair make a cropped cameo in the source photo too. Here’s another photo proving that TC was there that day. 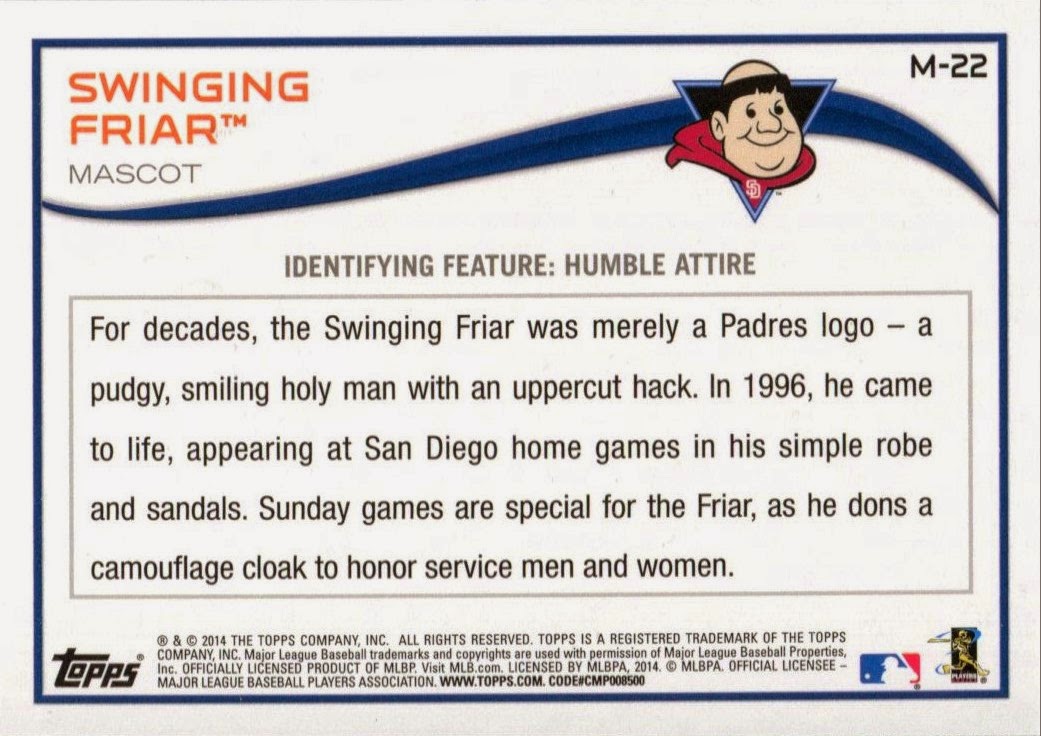 I guess tonsure is too much for a “kids” card? The blurb does refer to him as a holy man, but there aren’t any other religious references. No history lesson from Topps here.

This was all I could find on the Friar on the Padres official website and it was buried in the A-Z Guide:

·    SWINGING FRIAR
"The Swinging Friar" is the official mascot of the San Diego Padres. This fun-loving character pre-dates the Major League Padres, first serving as the mascot for the Pacific Coast League Padres. He was chosen as the mascot in 1961 and has become a Padres fixture.

I think 99% of the time you’ll see the mascot at their home stadium. I think it’s kind of cool that the Friar made the cross country trip for a special occasion. I’m going to give this card an A.
Posted by Once a Cub at 7:00 PM